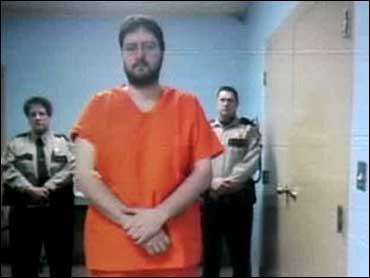 A former pizzeria manager accused of abducting two boys pleaded not guilty Monday to kidnapping, sexually abusing and trying to suffocate the boy he is suspected of holding for four years.

Michael Devlin, 41, clean-shaven and thinner since he was arrested in January, heard the charges against him from a jail cell in Potosi via a closed-circuit video feed. He stared into the camera and showed no emotion as he listened to the allegations that he sexually abused and tried to kill Shawn Hornbeck in October 2002.

Hornbeck, now 15, was 11 when he was taken while riding his bike near his home in Richwoods, Mo. In January, authorities searching for another missing boy, 13-year-old Ben Ownby, found both boys in Devlin's apartment.

Ownby, of Beaufort, Mo., had been missing for four days after being abducted shortly after getting off a school bus.

Devlin faces charges including kidnapping and forcible sodomy in three Missouri counties, plus federal charges of pornography and transporting a boy across state lines.

Devlin's attorneys have received about 2,000 pages of evidence from state and federal authorities. Attorney Ethan Corlija said it would be wrong to assume Devlin's case is a "slam dunk" that might be finished in one deal between all the jurisdictions.

Corlija said he plans to request that Devlin be transferred from the Franklin County jail to the St. Louis County jail, saying it is closer to his family and attorneys.

Another Devlin attorney, Michael Kielty, said he plans to ask the judge to move the trial. Prosecutor John Rupp said that defendants automatically get the right to switch the venue from a county as small as Washington County, and that he would not argue against the motion.

A task force made up of local, state and federal law enforcement officers continues to dig through Devlin's past to see whether he was involved in other unsolved missing child cases.