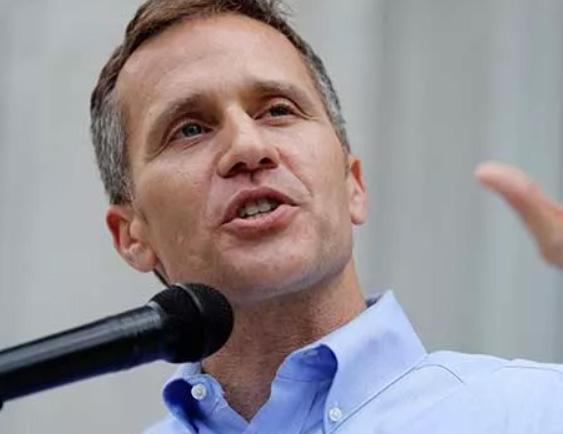 ST. LOUIS -- Prosecutors have dropped an invasion-of-privacy charge against Missouri Gov. Eric Greitens, but said they will still pursue a case against him -- either through a special prosecutor or an appointed assistant -- for allegedly taking a revealing picture of a woman with whom he has confirmed having an affair. Assistant St. Louis Circuit Attorney Ronald Sullivan made the surprise announcement Monday in court after the third day of jury selection in Greitens' trial.

Greitens reacted not long after the decision saying it was "a great victory that has been a longtime coming." He made a brief statement outside the courthouse Monday denouncing the "false charges" and apologizing "for the pain" that his actions caused.

"This experience has also been humbling, and I've emerged from it a changed man," he added. "I believe that in all of our lives, we have to deal with pain, and that if we deal with it in the right way, we can learn wisdom."

Sullivan cited the fact that Greitens' defense attorneys planned to call the St. Louis circuit attorney, Kim Gardner, as a witness and whose handling of the case has been under constant criticism by Greitens attorneys.

Greitens' defense team has particularly focused on the prosecutor's hiring of a private investigator, William Tisaby, whom Greitens' lawyers have accused of perjury.

"The court's order places the Circuit Attorney in the impossible position of being a witness, subject to cross-examination," including by her own subordinates, Gardner spokeswoman Susan Ryan said in a statement.

She said a decision will be made later to either seek a special prosecutor or appoint one of Gardner's assistants to proceed.

Missouri's rules of professional conduct prohibit attorneys from litigating a case in which they've been called as a witness, though those rules don't normally require the disqualification of the entire office or firm, said University of Missouri associate law professor Ben Trachtenberg.

Nationally, it's "super, super rare" for a judge to allow a prosecutor to be called as a witness, said Hadar Aviram, a professor at the University of California Hastings College of Law.

Some legal experts said prosecutors would have about a month to decide whether to file charges, because that's about how much time was left in the three-year statute of limitations when the original charge was filed.

Greitens, a 44-year-old first-term Republican governor, was charged with felony invasion of privacy for allegedly taking and transmitting a photo of an at least partially nude woman without her permission in 2015. If convicted, Greitens could have faced up to four years in prison. He's denied criminal wrongdoing, but has declined to directly answer questions about whether he took the photo.

He has rejected calls to resign from both Republicans and Democrats since he first admitted in January that he had an affair before he was elected governor in 2016.

Missouri's Republican legislative leaders renewed calls for Greitens to resign and confirmed they still will convene Friday in a monthlong special session to consider whether to impeach Greitens in an attempt to remove him from office.

Greitens also remains charged with a second felony in St. Louis for allegedly disclosing a donor list from a St. Louis-based veterans' charity he founded for use in his political campaign. No trial date has been set for that case.

Republican state Sen. Rob Schaaf, a vocal Greitens critic, wrote a letter in April to President Trump asking the commander in chief to request that Greitens, a former military officer, step down.

The woman's name never has been officially released; it is redacted from the legislative documents and she is identified only by her initials K.S. in court filings. She has testified that Greitens bound her hands to exercise equipment in March 2015 in the basement of his St. Louis home, blindfolded her and removed her clothes before she saw a flash and heard what sounded like the click of a cellphone camera. She has said Greitens threatened to disseminate the photo if she spoke of their encounter but later told her he had deleted it.

Greitens repeatedly has told reporters that the allegations against him were a "political witch hunt" -- a phrase similar to what Mr. Trump has used to discredit investigations into whether he had any role in Russia's interference in the 2016 elections.

Greitens' indictment in February prompted the Missouri House to launch its own investigation. It released a report in April containing more testimony from the woman that Greitens had restrained, slapped, shoved, threatened and belittled her during a series of sexual encounters that at times left her crying and afraid. The committee released a second report May 2 with testimony about how Greitens' gubernatorial campaign had used a donor list from The Mission Continues without the permission of the St. Louis-based veterans' charity he founded. Greitens also faces a felony charge in St. Louis for disclosing the donor list to his political fundraiser, though no trial date has been set.