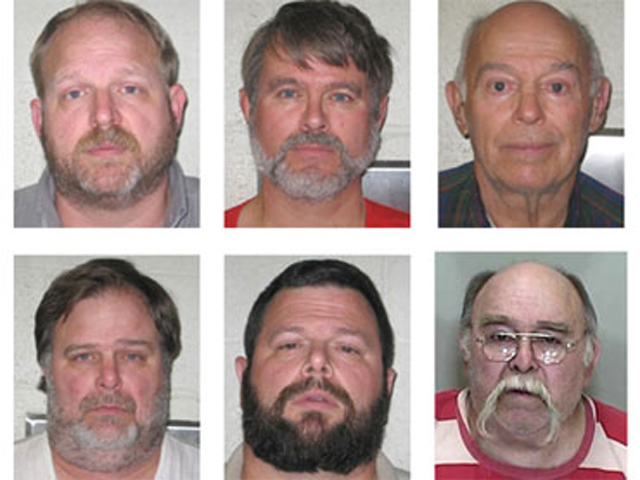 (CBS/AP) KANSAS CITY, Mo. - A prosecutor is dropping all charges against five members of the Mohler family, who were accused of sexually molesting young relatives on a western Missouri farm more than 20 years ago. Prosecutor Kellie Campbell said she doubted she could convince a jury that the bizarre claims were true.

Her decision has enraged some of the accusers who feel robbed of their day in court.

Six members of the Mohler family - Burrell Sr.; his sons Burrell Jr., David, Jared and Roland; and his brother, Darrel - were arrested in November 2009 after several young family members told investigators about a series of bizarre sex crimes that allegedly took place on a Lafayette County farm, about 30 miles east of Kansas City.

Two of the men, Burrell Sr., 79, and Burrell Jr., 56, spent more than two years behind bars before being freed on bond in recent weeks. In September, Darrel Mohler, 74, died in his sleep at his home in Florida.

Kimberly Benjamin, who represents Burrell Mohler Sr., said she was shocked Wednesday afternoon when she found out the charges had been dropped more than two years after her client was taken into custody.

"It's been a long time coming, but finally justice is served," she said. "Burrell is very happy and grateful to have closure so he can focus on his physical health and his family."

Allegations against the men included that the elder Mohler, an ordained minister, conducted wedding ceremonies in which young girls were "married" to older relatives so they could have sex.  The shocking accusations also included tales of bestiality, pregnancies and murders on the farm south of Bates City.

Before the charges were dropped, one of the alleged victims told the AP she was worried Campbell didn't want to take the case to court. The woman, who is not being identified, said she and other family members were eager to take the stand and tell what happened to them starting in the early 1980s.

"She has no intention of taking this to court," the woman said. "Every action has been in that direction."

Campbell countered, saying it was her job to build a strong case on behalf of the victims, and that's what she had tried to do.

"This was a highly unusual series of cases and the outcome should not deter other victims of crime from reporting those crimes," Campbell said.

Defense attorneys had increasingly argued that unfair trial delays were caused by the accusers' reluctance to turn over deeply personal medical and mental health records, as ordered by a judge.

The defense contended that because of the alleged extreme abuse, there would be medical records documenting the injuries, and requested all health-related records going back to when the accusers were small children.

Campbell said no murder charges were filed because no bodies had ever been found.

The woman who spoke with AP stood behind the murder allegations.

"We know what happened and can't deny it," she said. "What's so unbelievable about someone killing someone? It absolutely happened."

Complete coverage of the Mohler family case on Crimesider