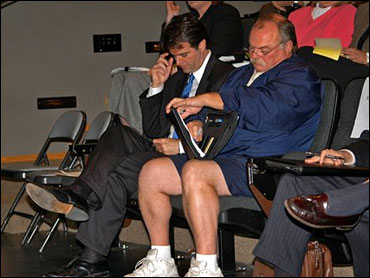 Not even the president of the United States can get Eddie Favre to wear pants.

Like many of his constituents, the mayor of Bay St. Louis lost everything but the clothes he was wearing when Hurricane Katrina flattened Mississippi's Gulf Coast. Favre turned his misfortune into a vow: He's not shedding his Bermuda shorts until his city is back on its feet.

President Bush joked about Favre's attire when they shared a stage. Journalists gawked at his black shorts and tuxedo top when he showed up in March at the annual Radio & Television Correspondents' Association dinner in Washington.

Favre, 52, welcomes the ribbing and stares as long as it keeps a spotlight trained on his city, which, before Katrina plowed ashore Aug. 29, was known for beachfront summer homes, quaint shops and a thriving art colony. Now the city is littered with bare concrete slabs where homes once stood, boarded-up businesses and government-issued trailer homes.

"Make us whole," pleads the five-term mayor, a distant cousin of Green Bay Packers quarterback and Mississippi native Brett Favre. "Until you make us whole, I'm wearing short pants. Somebody is going to get stuck with these ugly legs."

Many of the Gulf Coast's smaller cities are scrounging for money to plug gaping budget holes and jump-start the glacial pace of Katrina recovery.

The storm demolished more than 70 percent of Bay St. Louis' homes and businesses, scattered thousands of residents, vaporized its tax base and left behind tens of millions of dollars in damage to the city's infrastructure.

Roughly three-quarters of the city's pre-storm population of 8,000 is back, but many of those who returned are still waiting for the financial assistance they need to start rebuilding.

Meanwhile, a frustrated Favre says he's reduced to serving as a morale-booster while he presses state and federal officials to deliver aid to homeowners and the city, which anticipates a $15 million budget deficit over the next three years.

"I hate to see my people suffering so much and know that, to a large extent, there's not a g——— thing I can do to help them," Favre said.

Nine months after the killer storm, some communities, including Bay St. Louis, are still haggling with the Federal Emergency Management Agency over the timetable and cost of debris removal. And now another hurricane season is upon the city.

"He really knows what buttons to push," Hancock County Supervisor Steve Seymour says of Favre. "He's done everything he can to get the word out that the people of southern Mississippi are still in need."

Favre has probably never been more popular, but he's no stranger to controversy. In 1990, a year after he took office, he supported opening the city's first casino. Casinos are now widely touted as the region's economic engine, but back then many in Bay St. Louis balked at allowing them into the community.

"I made a decision that it could benefit our people, as long as we stayed in control and didn't let it take us over," Favre said, adding that tax revenue from Casino Magic accounted for more than half of the city's annual $7 million operating budget.

The expected reopening of Casino Magic later this year - under a new name - also would give Bay St. Louis a major boost, but it wouldn't single-handedly solve the city's woes. The road to recovery starts and ends with federal funding, Favre said.

And until his city gets what he feels it deserves, Favre isn't shedding his shorts.