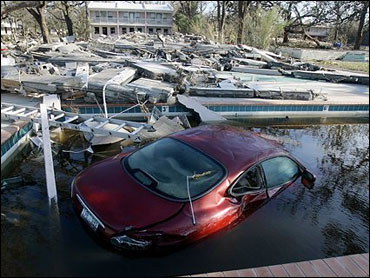 The death toll from Hurricane Katrina reached at least 110 in Mississippi alone, but no one was counting Wednesday, concentrating instead on rescuing survivors.

Police and firefighters worked around the clock, looking for survivors.

"We're in that critical time that people can be rescued," Chief Pat Sullivan said on CBS News' The Early Show. "If we don't get out thereto and do it now, then they're going to die."

The Federal Emergency Management Agency's Deputy Director Patrick Rhode told CBS News Correspondent Peter Maer the current mission in the region centers on lifesaving, as crews continue the search for survivors. He called it a "very aggressive search and rescue effort" and warned "the storm is just as dangerous after the storm as it was during" the disaster. He cautioned that people should not even think about returning to their homes.

A helicopter view of the devastation over Mississippi revealed people standing on black rooftops, baking in the sunshine while waiting for rescue boats.

"I can only imagine that this is what Hiroshima looked like 60 years ago," said Mississippi Gov. Haley Barbour after touring the destruction by air Tuesday.

One Mississippi county alone said it had suffered at least 100 deaths, and officials are "very, very worried that this is going to go a lot higher," said Joe Spraggins, civil defense director for Harrison County, home to Biloxi and Gulfport. In neighboring Jackson County, officials said at least 10 deaths were blamed on the storm.

Several of the dead in Harrison County were from a beachfront apartment building that collapsed under a 25-foot wall of water as Hurricane Katrina slammed the Gulf Coast with 145-mph winds Monday. Louisiana officials said many were feared dead there, too, making Katrina one of the most punishing storms to hit the United States in decades.

Many Mississippi residents remained without electricity, some without clean drinking water. Officials said it could be weeks, if not months, before most evacuees will be able to return.

Emergency medical teams from across the country were sent into the region and President Bush cut short his Texas vacation Tuesday to return to Washington to focus on the storm damage.

In devastated Biloxi, areas that were not underwater were littered with tree trunks, downed power lines and chunks of broken concrete. Some buildings were flattened.

One of the deadliest spots appeared to be Biloxi's Quiet Water Beach apartments, where authorities estimated 30 people were washed away, although the exact toll was unknown. All that was left of the red-brick building was a concrete slab.

"You want to cry, you want to just tear up and do that, but you know life goes on and you take the good with the bad," Gulfport resident Billy Barrett told Early Show co-anchor Harry Smith as he looked at the wreckage of his home. "We're alive, we're happy to be alive."

Hurricane Katrina picked up several Gulf Coast casinos and hurled them hundreds of yards inland, crippling the region's gambling industry for months and potentially even years.

At least three of the floating barge casinos in hard-hit Biloxi were tossed from their moorings by the storm's 25-foot wall of water, their barnacle-covered hulls coming to rest up to 200 yards from the shore. The Presidents Casino landed atop the Holiday Inn Express, some 500 yards down the shore and several hundred inland.

By law, casinos in Mississippi have to be moored offshore, not situated on land.

JP Morgan gambling analyst Harry Curtis said Tuesday in a investor's note that casinos in Biloxi could "either be severely or permanently impaired."

The effect on the Mississippi economy could be severe. About 14,000 people work in the dozen casinos along the Mississippi coastline. Each casino has a land-based hotel.

The hurricane damage could cost Mississippi some $400,000 to $500,000 a day in lost gambling taxes. Last year, the state's casinos generated $2.7 billion in revenue.