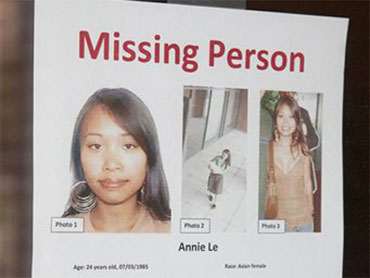 (AP)
Photo: Annie Le has been missing since Tuesday, Sept. 8.

"Avoid portraying yourself as a potential victim," was one of the nuggets of advice offered in her piece. But as the search for Le grows so do fears that something terrible has happened to the blushing bride-to-be.

Her article, entitled "Crime and Safety in New Haven," was published in February in "B magazine," a publication produced by Yale's medical school. Le's article takes a look at higher instances of robbery in New Haven compared to cities that house other Ivy League schools. The piece even i4ncludes an interview with Yale Police Chief James Perrotti, who offers advice such as "pay attention to where you are" and "avoid portraying yourself as a potential victim."

"In short, New Haven is a city and all cities have their perils," Le concludes. "But with a little street smarts, one can avoid becoming yet another statistic."

Le wrote that it is important to make a mental note of the attacker's physical characteristics, especially shoes, because as Perrotti told her, "The shoes are very important because they can shed the clothing along the way … shoes are unique."

Le, 24, who is pursuing a PhD in pharmacology is originally from Placerville, Calif., and was last seen Tuesday at her laboratory in the Yale Medical School complex, which is slightly less than one mile from the main campus.

It appears Le left her purse, cell phone, credit cards and money in her office. She planned to marry Columbia graduate student Jonathan Widawsky on Sunday, but has not contacted her family, co-workers or friends.

On Thursday, state police with bloodhounds searched the area where Le was last seen, and authorities were seen searching nearby trash bins. Perotti said the FBI was assisting in the search, and authorities also were reviewing images from closed-circuit cameras. Le's fiancée, professors, colleagues, friends and family also were helping, he said. FBI agents were spotted Thursday at her New Haven apartment but declined to comment. 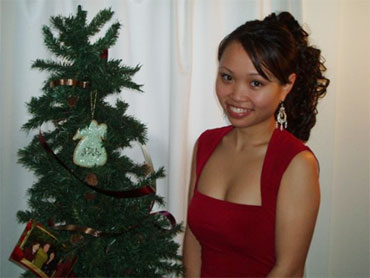 Asked about the possibility of foul play, Yale spokesman Tom Conroy said Thursday, "There's no evidence of it at this time."

Le is energetic and conscientious and was excited about getting married, said Debbie Apuzzo, who works in the pharmacology department.

Le is 4-foot-11 and 90 pounds, of Asian descent and has brown hair and brown eyes. She received her undergraduate degree in bioscience from the University of Rochester in 2007, said Sharon Dickman, a university spokeswoman.

While at the University of Rochester, she did a summer project at the National Institutes of Health on bone tissue engineering with a goal of regenerating tissue for people suffering from degenerative bone diseases. She said her career goal was to work as an NIH investigator or as a professor.

Her mentor, Rocky Tuan, described her as bright and hardworking, saying the NIH undergraduate scholars program was very selective.

"She's a very happy person," Tuan said. "Everybody got along with her. She's always smiling, laughing."