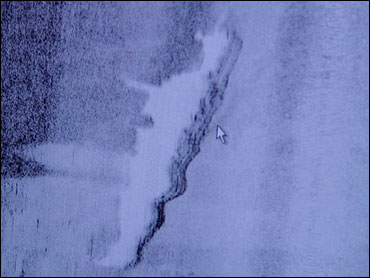 The mangled remains of a World War II submarine were found in the Bering Sea on Wednesday night, more than six decades after the U.S. Navy vessel disappeared with a crew of 70 off the Aleutian Island of Kiska.

The discovery of the USS Grunion culminates a five-year search led by the sons of its commander, Mannert Abele, and may finally shine a light on the mysterious last moments of the doomed vessel.

"Obviously, this is a very big thing," the oldest son, Bruce Abele, said Thursday from his home in Newton, Mass. "I told my wife about it when she was still in bed and she practically went up to the ceiling."

A remotely operated vehicle snapped pictures and captured three hours of video footage of the Grunion on a rocky underwater slope north of the volcanic island, according to John Abele, who was in Kiska Harbor with the search team on Thursday.

The submarine lies 1,000 feet from the surface and had been crushed by water pressue, said Abele. He is director and co-founder of the medical equipment company Boston Scientific Corp. and the youngest of the three brothers.

"The most surprising thing was the damage," said Abele. "It was much more than we or anyone else imagined. Initially it was very hard to recognize as a ship."

(CBS)
The hull had imploded so severely that the interior, including bunks and a dive wheel, are clearly visible, Abele said. No human remains were found.

The search team hired by the Abeles, Deep Sea Systems International, said no identifying markings or lettering could be seen, however, the location and appearance of the vessel indicate it is the missing sub.

"There's a 95 percent chance that this is the Grunion and a less than five percent chance that it's not," said Christopher J. Nicholson, general manager of the company based in Cataumet, Mass. "The fact that they actually found this in an expanse of ocean is really pretty spectacular."

The Grunion had a propeller guard, which was rare in subs of the day, Abele said. The vessel discovered yesterday also had the fence, which prevented docking lines from getting caught in propeller.

The Grunion patrolled Alaska's Aleutian Islands during the early months of World War II. Her last official radio message to the submarine base at Dutch Harbor came on July 30, 1942 and described heavy enemy activity at Kiska Harbor.

Earlier that month, the Grunion had sunk two Japanese submarine chasers and heavily damaged a third near Kiska, one of two islands in the far west Aleutians captured by the Japanese.

Until a few years ago, the clues to the Grunion's disappearance were too fragmented to justify a search.

But after receiving more information from a model ship builder in Japan, the Abeles launched an initial expedition to Kiska in August 2006. Sonar images of a sub-shaped silhouette prompted a second journey this month.

The relatives of one more man, Byron Allen Traviss of Detroit, remain to be found.

Bentz said the news is a relief after decades of not knowing what happened. Her father's youngest brother, Carmine Anthony Parziale, of Weedville, Penn., was in his early 20s when he served as a torpedoman third class on Grunion.

"I know when my dad would talk about him, his eyes would well up with tears," said Bentz. "I was relieved to know that this is finally over, that now we can say, two and three generations later, that we know what happened."

A forensic engineer and other experts will use the footage to piece together the Grunion's final hours and figure out why it sank. The search crew of 17 plans to spend several more days looking for sunken Japanese ships in the area.

"Actually seeing the burial site was touching and in a way rewarding," John Abele said. "It provides a closing and hopefully an answer to the unknown."