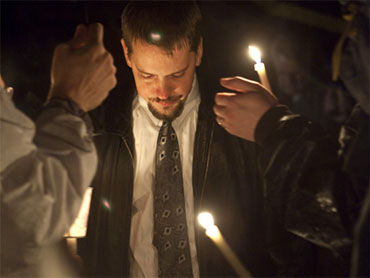 A Utah man considered a person of interest in the disappearance of his wife was among more than 60 people who attended a vigil for her Sunday night in her parents' hometown in Washington state.

Sunday's vigil for Susan Powell, the mother of two young boys, was held outside a church in Puyallup, Wash., south of Seattle. Besides Josh Powell, the rainy event was attended by Susan's grandparents, parents and siblings.

Josh Powell, 34, of the Salt Lake City suburb West Valley City, did not speak to a hoard of cameras and media gathered at the event.

CBS News correspondent Whit Johnson reports that supporters shielded Powell from the media with a wall of umbrellas as he stood in a downpour. His 4-year-old son, Charlie, accompanied him at the vigil and held a candle as many of Susan's friends and families stared at Josh in surprise, The Salt Lake Tribune reported.

He spoke to his wife's sister, Denise, briefly and gave the woman a hug. After the encounter, she told the Tribune that she asked how he and the children were doing and if she could speak to him later about recent events.

She said he agreed to talk to her.

Susan's parents, Chuck and Judy Cox walked by Josh and did not stop to talk to him.

Josh Powell's attorney, Scott Williams, said earlier in the day that his client went with his children to his father's house in Washington state for the holidays.

There are no restrictions on Powell's movements, said Tom McLachlan, a police captain in West Valley City, a suburb of Salt Lake City.

"He can come and go as he pleases," McLachlan said Sunday, adding that police would still like to speak with him again.

Family friend Wayne Hamberg told CBS News, "I would like to believe that none of my friends are capable of an unthinkable act," adding that any accusations against Josh Powell should be quieted as the official investigation continues.

Vigil attendees stood under tents and umbrellas while holding candles, singing and signing a poster of Susan, The News Tribune newspaper in Tacoma reported on its Web site.

"It is the wish of (Susan's family) that tonight be a night of hope, a night of faith and a night of love," family spokeswoman Shelby Gifford said.

Susan Powell, 28, moved from New Mexico to Puyallup when she was 10 years old and graduated from high school there in 2000, the newspaper reported.

She was reported missing since Dec. 7, when she failed to show up for her stockbroker job in West Valley City, Utah. Josh Powell told police he last saw her at 12:30 a.m. that day when he took their two boys, ages 2 and 4, on a camping trip and left her at home.

Police have called Josh Powell a person of interest and said he was not forthcoming in interviews with detectives.

Susan Powell's parents and siblings have said they were saddened that Josh Powell had been named a person of interest, but not surprised.

Salt Lake City resident Wayne Hamberg, one of Josh Powell's friends, has said Josh and Susan Powell had problems like any other couple, but he never saw any signs of domestic violence or other serious issues.