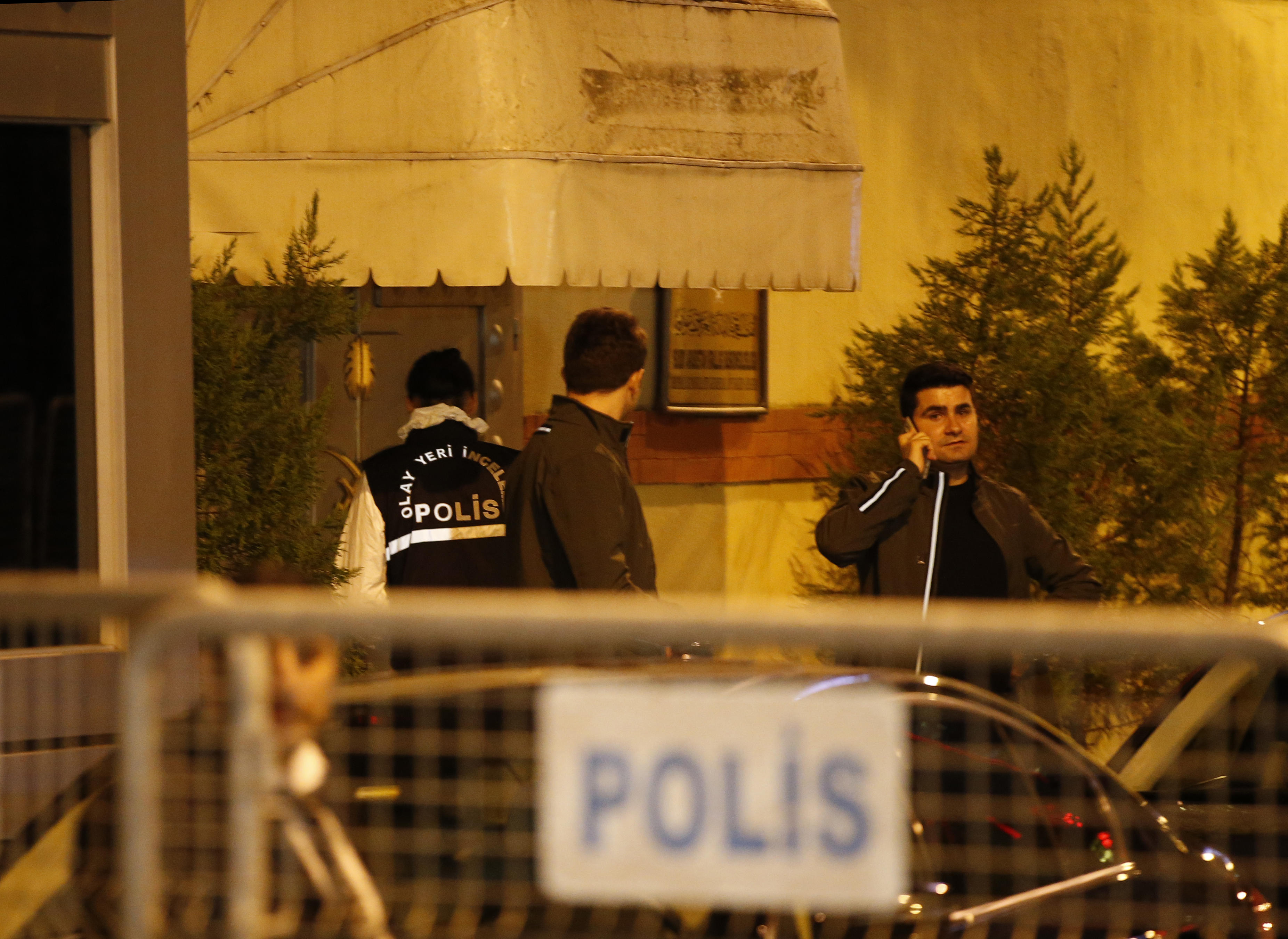 ISTANBUL -- A team of investigators entered the Saudi Consulate in Istanbul on Monday for what Turkish officials called a joint inspection of the building where Saudi journalist Jamal Khashoggi disappeared nearly two weeks ago. The team arrived by unmarked police cars at the consulate and said nothing to journalists waiting outside as they entered the building.

Police then pushed back journalists from the front of the consulate, where they've been stationed for days, setting up a new cordon to keep them away.

The makeup of the investigative team that entered the diplomatic compound was not immediately clear. International concern continues to grow over the writer's Oct. 2 disappearance. American lawmakers have threatened tough punitive action against the Saudis, and Germany, France and Britain have jointly called for a "credible investigation" into Khashoggi's disappearance.

A Foreign Ministry official had earlier said the team would visit the diplomatic post Monday. The official spoke on condition of anonymity in line with government regulations. Officials in Saudi Arabia did not immediately respond to a request for comment.

Turkish officials have said they fear a Saudi hit team that flew into and out of Turkey on Oct. 2 killed and dismembered Khashoggi, who had written Washington Post columns critically of Saudi Crown Prince Mohammed bin Salman. The kingdom has called such allegations "baseless" but has not offered any evidence Khashoggi ever left the consulate.

Such a search would be an extraordinary development, as embassies and consulates under the Vienna Convention are technically foreign soil. Saudi Arabia may have agreed to the search in order to appease its Western allies and the international community.

However, it remained unclear what evidence, if any, would remain nearly two weeks after Khashoggi's disappearance. As if to drive the point home, a cleaning crew with mops and trash bags walked in past journalists waiting outside the consulate on Monday.

President Donald Trump has said Saudi Arabia could face "severe punishment" if it was proven it was involved in Khashoggi's disappearance. Trump tweeted Monday that he had spoken with Saudi King Salman, "who denies any knowledge" of what happened to Khashoggi.

"He said that they are working closely with Turkey to find answer," Mr. Trump wrote. "I am immediately sending our Secretary of State (Mike Pompeo) to meet with King!"

Mr. Trump later said perhaps "rogue killers" are responsible for the journalist's fate. But, the president added, who knows.

On Sunday, Saudi Arabia warned that if it "receives any action, it will respond with greater action, and that the kingdom's economy has an influential and vital role in the global economy."

"The kingdom affirms its total rejection of any threats and attempts to undermine it, whether by threatening to impose economic sanctions, using political pressures or repeating false accusations," said the statement, carried by the state-run Saudi Press Agency.

The statement did not elaborate. However, a column published in English a short time later by the general manager of the Saudi-owned Al-Arabiya satellite news network suggested Saudi Arabia could use its oil production as a weapon. Benchmark Brent crude is trading at around $80 a barrel, and Trump has criticized OPEC and Saudi Arabia over rising prices.

Saudi media followed on from that statement in television broadcasts and newspaper front pages Monday.

The Arabic-language daily Okaz wrote a headline on Monday in English warning: "Don't Test Our Patience." It showed a clenched fist made of a crowd of people in the country's green color.

The Saudi Gazette trumpeted: "Enough Is Enough," while the Arab News said: "Saudi Arabia 'will not be bullied'."

The Arab News' headline was above a front-page editorial by Dubai-based real-estate tycoon Khalaf al-Habtoor, calling on Gulf Arab nations to boycott international firms now backing out of a planned economic summit in Riyadh later this month.

"Together we must prove we will not be bullied or else, mark my words, once they have finished kicking the kingdom, we will be next in line," al-Habtoor said.

Already, international business leaders are pulling out of the kingdom's upcoming investment forum, a high-profile event known as "Davos in the Desert," though it has no association with the World Economic Forum. They include the CEO of Uber, a company in which Saudi Arabia has invested billions of dollars; billionaire Richard Branson; JPMorgan Chase & Co. Chief Executive Jamie Dimon; and Ford Motor Co. Executive Chairman Bill Ford.

News that the CEO of Uber, Dara Khosrowshahi, would pull out of the conference drew angry responses across the region. The foreign minister of the neighboring island kingdom of Bahrain, Khalid bin Ahmed Al Khalifa, tweeted Sunday night that there should be a boycott of the ride-hailing app both there and in Saudi Arabia.

The king said Turkey and Saudi Arabia enjoy close relations and "that no one will get to undermine the strength of this relationship," according to a statement on the state-run Saudi Press Agency. While Turkey and the kingdom differ on political issues, Saudi investments are a crucial lifeline for Ankara amid trouble with its national currency, the Turkish lira.

Prince Mohammed, King Salman's son, has aggressively pitched the kingdom as a destination for foreign investment. But Khashoggi's disappearance has led several business leaders and media outlets to back out of the upcoming investment conference in Riyadh, called the Future Investment Initiative.

The Saudi stock exchange, only months earlier viewed as a darling of frontier investors, plunged as much as 7 percent at one point Sunday before closing down over 4 percent. On Monday, Riyadh's Tadawul exchange closed up 4 percent.

Concerns appeared to spread Monday to Japan's SoftBank, which has invested tens of billions of dollars of Saudi government funds. SoftBank was down over 7 percent in trading on Tokyo's stock exchange.

Khashoggi has written extensively for the Post about Saudi Arabia, criticizing its war in Yemen, its recent diplomatic spat with Canada and its arrest of women's rights activists after the lifting of a ban on women driving. Those policies are all seen as initiatives of the crown prince.