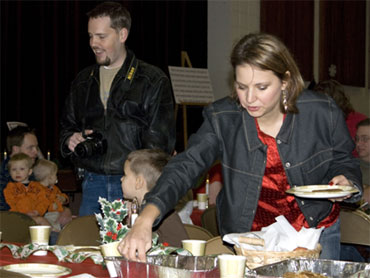 And, on "The Early Show" Friday, Charles Cox said his thoughts about his daughter are simple: "Where is she? Susan, how are you doing? Where are you?"

Cox said Josh Powell should open up to authorities once and for all. "We've tried to stand by -- the whole family's tried to stand by Joshua and give him the time he needs to do whatever he needs," Cox told co-anchor Harry Smith, "and we're waiting for a credible answer from him, we're waiting for a credible explanation to what he knows. And he now has an attorney. He needs to give the police the information he has and he needs to help us to find Susan.

"We'be been patient. We've been supportive. We're trying to hang in there. ... The explanation he originally gave is wearing thin."

At a tearful news conference Thursday, other members of Susan Powell's family expressed sadness that police have grown increasingly suspicious of Josh Powell as the criminal probe wears on.

Susan Powell, a 28-year-old mother of two young children, was reported missing Dec. 7 when she didn't show up for her stockbroker job at a bank. She was last seen a day earlier.

What had been a missing persons case for several days has now turned into a criminal investigation with foul play suspected.

Eight members of Susan Powell's family were present at Thursday's news conference in Puyallup, Wash., where her parents live.

As family friend and spokeswoman Shelby Gifford spoke about Powell's life, several members broke down in tears and embraced each other.

Her husband, Josh Powell, has not been named a suspect, but authorities have dubbed him a person of interest, saying he has demonstrated a frustrating lack of cooperation that has only increased their suspicion of him. Police suspect foul play.

Gifford said friends and family members weren't surprised authorities named him a person of interest "given the events and his reactions to them in the past week."

Though friends and family stood by Josh Powell at first, they now describe him as a controlling husband. "If we felt Susan was in danger," Gifford said, "we'd have taken steps to get her out of the relationship. But we're learning things right along with you this week."

"We know that Susan is an excellent mother and would not have tolerated her children being taken out of the home after midnight to go camping in dangerously cold conditions," Gifford said.

Josh Powell has said Susan was home when he went camping with the couple's boys, ages 2 and 4, in freezing temperatures in the middle of the night Dec. 7. He says they slept in the family van and found the house empty when they returned in the evening.

West Valley City Police Capt. Tom McLachlan on Thursday said the 4-year-old boy was interviewed within "a day or two" after his mother was reported missing. The son told police his family went camping - an event his father has said coincided with her disappearance.

"I think the verification of the camping trip is important to the timeline on this," McLachlan said, cautioning against placing too much importance on the child's statement.

Investigators searched the Powell home for a second time in nine days Thursday, but would not disclose what was taken. Police have also searched Josh Powell's van.

Court records show that the family filed for bankruptcy in 2007, but Gifford declined to talk about the couple's financial history. She characterized their marriage as normal, with ups and downs.

McLachlan declined to comment on whether police had obtained a notebook or journal from Susan Powell's office, which reportedly detailed an alleged threat made by her husband about a year ago.

Cox told Smith he feels the Powell children, who are in Josh Powell's custody, are safe with him.

Meanwhile, police said investigators have discussed conducting a polygraph test of Josh Powell, but no such interview has occurred.

"He is not allowing us the opportunity to interview him at length in order to verify his statements and also to get more specifics," McLachlan said. "His statements are absolutely vague."

Josh Powell's attorney, Scott Williams, disputed allegations made that his client had been uncooperative. Josh Powell has spoken to police and provided a DNA sample this week, as did several other family members. Williams, a defense attorney who often defends high-profile clients, described the DNA testing as routine in such cases.

Josh Powell's brother-in-law, Kirk Graves, said the family is "not doing well," and struggling to deal with Susan's Powell's disappearance. He said Susan Powell's young boys have asked about their mother's whereabouts.

"It's coming up on Christmas and this is about the worst time of year to have the very worst thing happen to you," Graves said.