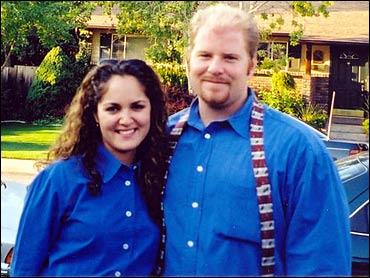 Three days before her husband reported her missing, Lori Hacking took a phone call at work that left her stunned and sobbing, her colleagues at a brokerage house told The Associated Press.

Several colleagues said Hacking had been arranging for on-campus housing at the University of North Carolina medical school and that they believe the school was returning a call to say her husband, Mark Hacking, was not enrolled there, as he had told her.

Lori Hacking left work early after receiving the call Friday afternoon, July 16. Mark Hacking reported his wife's disappearance the following Monday. She is now feared dead, and her husband has become the focus of the police investigation.

At the time of her disappearance, the couple were packing to move to North Carolina. But after she vanished, police and family members learned that besides lying about being accepted to medical school, Mark Hacking had not even graduated from college.

Mark Hacking, a 28-year-old nightshift hospital orderly, has been at a psychiatric hospital since police found him running around naked in sandals the night after the search for his wife began. Police refused to say whether he was being held involuntarily.

His family has hired defense attorney D. Gilbert Athay, who said Monday he has spoken to Hacking many times since being hired Thursday. He refused to characterize the conversations.

Lori Hacking, a 27-year-old trading assistant who just learned she was five weeks pregnant, was a private woman who did not share personal troubles, making her breakdown in the office all the more unusual, said colleagues at Wells Fargo Securities Services.

"She was visibly upset. She started to cry and got up to walk away," her supervisor, Randy Church, told the AP on Monday. He said that when co-workers asked her what was wrong, she replied, "It's no big deal; I'm OK. But I think I will go home."

Lori Hacking's co-workers gave accounts of the phone call to homicide detectives after she was reported missing. Officials at the University of North Carolina were trying to determine whether one of their administrators made the call.

"We wouldn't have any reason to doubt" the Wells Fargo employee accounts, Detective Dwayne Baird said Monday. He would not comment further, but later dismissed suggestions an arrest was imminent.

"Our most important focus in this case is the fact we have a missing person and, coupled with that, it's under very, very suspicious circumstances," he said.

Church said detectives showed up at Wells Fargo the day after Hacking's disappearance and inspected her e-mail and computer files.

Lori Hacking's mother, Thelma Soares, was unaware her daughter had received the upsetting phone call, but did not get a chance to speak to her the weekend before she vanished, family spokesman Scott Dunaway said.

Results on some of the evidence collected by police, including a mattress recovered from a trash bin and a box spring taken from the couple's apartment, could come back from a laboratory this week.

Brandon Hodge, another trading assistant, said that at about 10 a.m. on Monday, July 19, Mark Hacking placed a call to his wife's office, speaking first to Hodge.

"By the way, how is Lori?" Hodge quoted Hacking as asking. Hodge said he replied, "Well, she's not made it into work yet."

Church, who had been expecting Lori Hacking at 7 a.m. and says she was never late to work, then took the phone. He recalled Mark Hacking saying his wife had not returned from a sunrise jog at Memory Grove, a downtown park near the office. Hacking made it seem as if he was calling from his apartment, Church said.

"I said, `You need to call police immediately. Just get off the phone,'" Church said.

But Hacking did not immediately call police, and police say he was at a store buying a new mattress shortly before reporting his wife missing.

Three of her co-workers who spoke to the AP said they showed up at Memory Grove before Mark Hacking joined them. When he arrived in his Dodge Durango, they told him his wife already had been reported missing. He then placed a call of his own to police dispatchers.

Hacking began an aimless search, walking and pondering before taking off on his own and abandoning Lori's co-workers. But first, he sat in his sport utility vehicle with an address book on his lap, making calls, apparently to relatives.