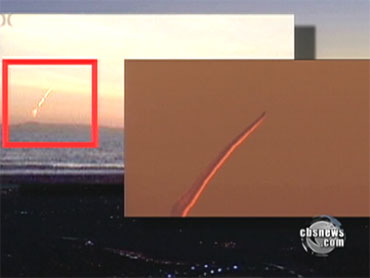 It sure looked like a missile, leaving a trail of smoke on its journey to who-knows-where, high over the Pacific Ocean off southern California.

CBS News National Security Correspondent David Martin reports that 36 hours after the video of the mystery missile went viral, the Pentagon, with all its satellites, radars and command centers, finally put it to rest. Sort of.

(Scroll down to watch the visual evidence)

"All of those factors together leave us pretty confident that this was a CONTRAIL caused by an aircraft," says Acting Deputy Assistant Secretary of Defense Col. Dave Lapan.

Pretty confident the CONTRAIL - short for condensation trail - was left by a jet airliner. That, after checking with the Federal Aviation Administration, Dept. of Homeland Security, the Navy, the Air Force and the North American Air Defense Command.

Mick West, who runs a website devoted to CONTRAILS, knew it was an airplane the moment he saw the video.

"It's coming more or less straight towards you and it's in level flight," says West. "It's not climbing. It's not descending. It's probably around 35,000 feet."

How can that be when it looks for all the world as if it's climbing into space?

On viewing the video of the mystery missile, West has an answer.

"I've got a fairly good idea that it was U.S. Airways flight 808 from Hawaii," he says. "Honolulu to Phoenix."

Maybe the Pentagon could use a few good CONTRAIL watchers like Mick West.

Watch to compare the evidence: