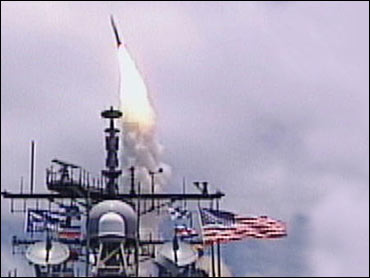 A sea-based missile defense system failed its first test since the Bush administration outlined plans to have a rudimentary program ready for use by 2005, Defense Department officials said.

Wednesday's test over the Pacific Ocean followed a series of successful strikes over the past 2½ years, and it was the first failure among four sea-based tests.

For the test, a Standard Missile-3 interceptor fired from the USS Lake Erie cruiser was tracking an Aries target missile launched from the Pacific Missile Range Facility on Kauai — a feat likened to trying to hit a bullet with a bullet.

After the miss, the two rockets crashed into the ocean.

"You test a little, you learn a lot and you continue to go forward. This is rocket science," he said.

Under the Bush administration plans, announced in December, 20 Standard Missile-3 interceptors would be placed aboard three Navy ships with improved versions of the Aegis system that uses radar to detect hostile missiles and cue on-board weapons to intercept them.

This sea-based system, known as the Aegis Ballistic Missile Defense, was outlawed under the 1972 Anti-Ballistic Missile Treaty, but President Bush gained the flexibility of testing it when the United States withdrew from the treaty last summer.

The president's plan also calls for the development of 20 ground-based missile interceptors, which would be placed in Alaska and California, known as the Ground-Based Midcourse Defense. Advanced Patriot missiles will also be deployed.

The ship and ground based defenses due to be rolled out first are geared to "killing" enemy missiles in mid-flight — after they have entered orbit from their launch-pads and before they have began to descend toward their target. The Patriot system hits them on their way down.

Beyond 2005, the Pentagon envisions expanding its layered missile defense so that it can attack enemy missiles are all stages in flight.

This would include a laser to knock out missiles soon after launch, as well as a Theater High Altitude Area Defense to hit missiles on their final descent.

Wednesday's test was the fourth trial of the ship-based system; the previous three drills have succeeded. In eight tests of the ground-based system, there have been four successes and four failures.

After the last failure in December 2002, the Missile Defense Agency said it would postpone two additional tests scheduled for winter and spring 2003.

It was decided that no tests were needed until work was done on a new booster rocket for the missile interceptor. Problems with boosters have been blamed for two of the four ground-based failures.

Tests of the ground-based system cost about $100 million apiece.

The Congressional Budget Office has estimated that through 2015, the entire program will cost $49 billion.

According to the Missile Defense Agency, there are plans to spend about $3 billion over the next ten years on the ground-based system. Aegis development will cost $2.5 billion, and high-altitude defenses about $3 billion.