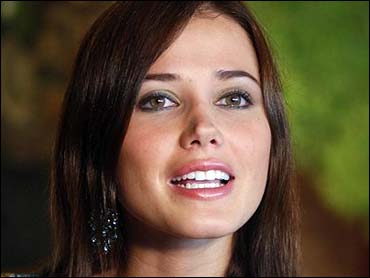 The reigning Miss World, Peru's Maria Julia Mantilla, is considering suing her plastic surgeon, claiming that he's stretching the truth about the work he did on her.

"He has said that I'm his product, the product of Peruvian plastic surgery, and says he molded my body, that he removed fat, and everything," the 20-year-old beauty queen told The Associated Press on Wednesday. "He's talking about things he never did."

She said Cesar Morillas, one of Peru's most sought-after plastic surgeons, did give her a nose job and breast augmentation in February 2004. Ten months later, the aspiring high school teacher was crowned Miss World in the southern Chinese beach resort of Sanya.

Mantilla denied that Morillas operated on her ears, chin, eyebrows and lips as was suggested in before-and-after photographs of her profile supplied by the plastic surgeon to the daily newspaper El Mundo in Spain.

"That violates his professional ethics," she said.

She added that Morillas had made reference to surgery he never performed in two Peruvian magazines.

Mantilla said she fulfilled the terms of a promotional agreement with Morillas to publicize his clinic in exchange for the plastic surgery but that the contract ran out in April, and he is still "looking for publicity."

"He says I am his greatest accomplishment. In other words, I'm here thanks to everything he did," she said. "I don't believe surgery changed my essence."