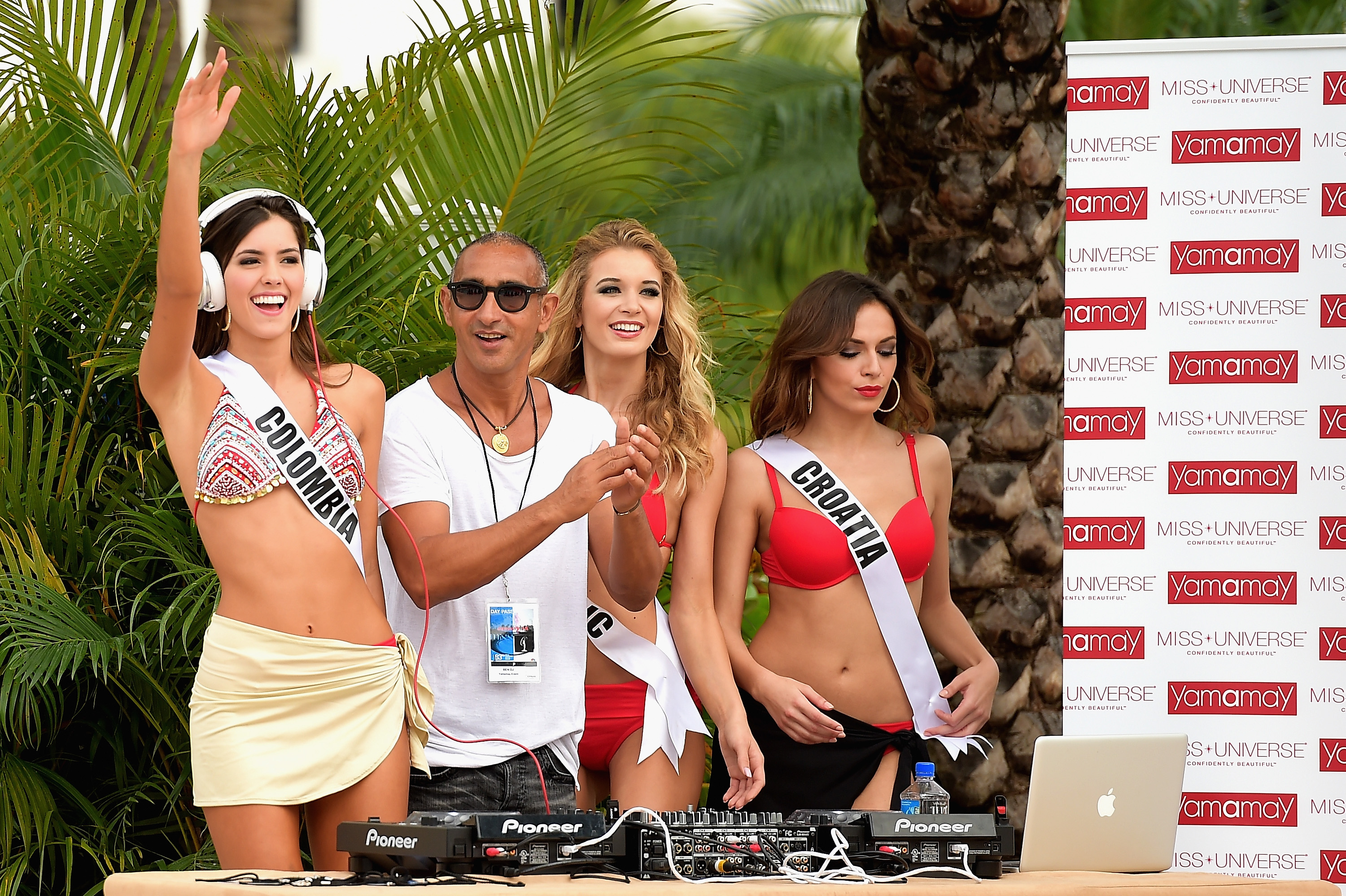 Contestants from 88 countries will vie for the title of Miss Universe on Sunday in Florida. The women arrived in Miami nearly two weeks ago ahead of the main event, in which Miss Universe, Gabriela Isler of Venezuela, will pass on her crown.

WILL ANOTHER LATINA TAKE THE CROWN?

"Latin women, Latin people, are very emphatic. They have it in their blood, right? So, it could be true that maybe between the Latin women there may be more competition," Miss Bolivia Claudia Tavel said. "And we hope that this year, like brothers, we'll support (each other) and that Miss Universe will be a good-hearted woman, and be a Latina."

At 19, Miss Venezuela Migbelis Lynette Castellanos is one of the youngest contestants in the pageant. She especially is feeling the heat - three of the last six titles have gone to Venezuelans.

"I have the pressure and the support from all the Venezuelans," she said.

"Our video for today is her trying to teach me how to talk in an Aussie accent. ... We'll do some self-defense moves, we'll do some hair advice. We've got a lot of stuff going on," Sanchez, 24, said.

Miss France Camille Cerf says it's been difficult to be away from her country in the aftermath of this month's terrorist attacks.

"I can't really feel what's happening there, so it's making me really sad," Cerf said. She did have a message for her people: "They don't have to be afraid. They have to hope and think about good things."

Lebanon and Israel are longtime foes, and Lebanon doesn't have relations with its neighbor. Lebanese Tourism Minister Michel Pharon said that "if there was bad intentions" from Miss Lebanon Saly Greige, measures could be taken against her.

Griege said Matalon took the photo without her permission. Matalon said it was a joint photo and was saddened that Griege was being criticized at home. "We need to remember that we represent the country and the people, not the government and not the political issues," she said.

Miss Indonesia Elvira Devinamira, 21, nicknamed a gown after an "X-Men" character because of the scalelike sequins that change color from silver to pink when she moves her hand up or down the dress.

"I call it 'Mystique.' It's fun," said Devinamira, who worked with the designer on the gown. In the comics, Mystique's superpower is mimicking the voice and appearance of any person.

Miss USA Nia Sanchez says she is counting down the minutes until she finishes the swimsuit competition and she can finally indulge in her favorite treat.

"I have a jar of Nutella I'm going to have backstage," she said.

Maybe she got the idea from fellow chocaholic Miss Norway Elise Dalby, who says she believes one piece of chocolate a day makes all her troubles go away.

Miss Venezuela Migbelis Lynette Castellanos might not be competing in her home country, but it's the next best thing. The host city of Doral is often referred to as "Doralzuela" for its many Venezuelan residents.

"Brits are quite fickle. They're not very supportive of beauty pageants, and I think it will take a Great Britain win for them to be a lot more supportive."

And the one truly at home, Miss USA Nia Sanchez says she feels less pressure competing in the U.S. More than 30 friends and family members, including her 8-year-old brother and grandparents, are part of her cheering squad.

"I feel like I can just go in there and have fun and really enjoy myself because I'm in a comfortable zone," said Sanchez, who is from Nevada.

- Miss Great Britain Grace Levy, 25, was featured on a popular dating show called "Take Me Out." She went on a date with a fire-dancing hippie.

- Miss China Yanliang Hu has a father who is a firefighter and mother who is a policewoman. She once stole her mother's uniform and wore it to a police exhibition.

- At 6 feet (1.83 meters) tall, Miss Peru Jimena Espinosa is one of the tallest contestants.

- Miss Japan Keiko Tsuji has a black belt in karate.

- Miss Finland Bea Toivonen is following in her mother's footsteps. Her mother was Miss Universe Finland 1985 and competed in Miami 30 years ago.