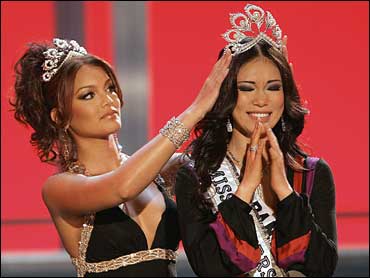 Less than a month after being crowned Miss Universe, Riyo Mori is hoping to land another job: a role on the NBC sci-fi series "Heroes."

"As soon as I won Miss Universe, I had this big chance," Mori said in an interview Monday. "I've never acted before. I went to the casting audition and read a script in English and Japanese, and they said it was really good. So I hope I can be in the show."

Mori said the role of Yaeko would be a love interest for one of the main characters on "Heroes."

The 20-year-old dancer won the 2007 Miss Universe contest in Mexico City last month. The only other time a Japanese entrant won the pageant was in 1959, when Akiko Kojima became the first Miss Universe from Asia.

"I'm only here for a week, then it's back to New York" and a tour around the world, Mori said.

"It's funny because I've never been surrounded by so many people, so many cameras," she said. "Japanese people never cared about beauty pageants before. But this is a huge thing in Japan now."

Mori said she's hoping to devote herself to her new role, which includes being a spokeswoman for AIDS issues.

Mori, who has been dancing since she was 4, said she was encouraged to enter the competition by her grandmother.

"I thought I needed something for my life, something different," she said. "Miss Universe isn't all about beauty. It's about serving people, too."

Mori, who lived in Canada for three years and studied classical ballet, said her goal after finishing her year as Miss Universe is to open a dance school. Her mother was also a dancer. She said the long years she spent training in dance helped build her character, and that appealed to the judges.

"I think I have a samurai soul," she said. "I'm very patient, and I can serve others."