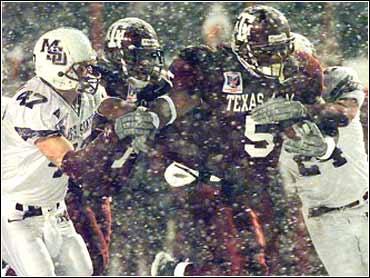 Not until he was crushed under a pile of teammates in the snow did Wayne Madkin know he had won the game.

Madkin scored on a 6-yard scramble to give Mississippi State a 43-41 overtime victory over Texas A&M on Sunday night in the Independence Bowl.

"I broke contain ... I had a guy coming at me and I was trying to stretch it as far as I could," said the junior quarterback from Huntsville, Ala., who said he had never played in snow before.

"I knew when all these guys jumped up on me and I couldn't breath that I got in the end zone."

It was the first meeting between Texas A&M and Mississippi State since former Aggies coach Jackie Sherrill took over the Bulldogs in 1991.

"Considering everything, it's a big, big win," said Sherrill, who dodged questions about his history at Texas A&M.

Ja'Mar Toombs had a 25-yard touchdown run on the Aggies' first play of overtime to give Texas A&M a 41-35 lead, but Terence Kitchen's extra-point attempt was blocked by Willie Blade.

Eugene Clinton scooped the blocked kick out of the snow and before he could be pulled down at midfield, he flipped the ball back to Julius Griffith who raced to the end zone for a 2-point defensive conversion. That made the score 41-37 and gave the Bulldogs a chance to win it with a TD.

"I've been coming close all year," Blade said of his key block.

The pregame hype revolved around Sherrill, who coached the Aggies from 1982-88, and Texas A&M coach R.C. Slocum, a former assistant who took over for Sherrill in 1989.

But the game was dominated by the running of Toombs and Mississippi State's Dontae Walker and the rare Southern snowfall that covered the field.

Toombs ran for 193 yards and three touchdowns on 35 carries.

"The trekking was real hard," said the 255-pound fullback. "It was hard to really burst with the ball. I had to slow down before I coul get going."

But once he got going he plowed through the snow and Mississippi State.

Walker matched Toombs with three touchdowns, along with 143 yards on 16 carries.

Mississippi State rallied from 14 points down with two touchdowns in the final 8:16 of the fourth quarter.

An interception by Marco Minor deep in Texas A&M territory gave the Bulldogs a first-and-goal at the Aggies' 4 with 2:50 left in the game trailing 35-28.

On third down, Madkin faked a handoff and found Donald Lee all alone in the snow-covered end zone for a 3-yard touchdown pass to tie it with 1:30 left.

Madkin's game-winning TD came on a similar play-action pass on second-and-goal at the 6.

Toombs was especially effective early, running for 73 yards and a touchdown on Texas A&M's first two series, and helping the Aggies grab a 14-0 lead.

Mississippi State managed to slow Toombs in the second and third quarters, but he got rumbling again in the fourth quarter. His 13-yard TD run with 9:20 left gave the Aggies a 35-21 lead.

Walker scored his third touchdown on a 32-yard run on the ensuing Mississippi State drive to cut the lead to 35-28 at 8:17.

Sherrill guided the Aggies to three straight Southwestern Conference championships (1985-87). But the success was overshadowed by NCAA violations.

While he downplayed the significance of facing his former employer, Sherrill had publicly stated he was hoping to face the Aggies when the bowl pairings were being sorted out.

"You guys make a lot of this game that isn't there," Sherrill said. "I didn't play a down, these guys did."

After the game he was carried off the field by his players.

Sherrill, the winningest coach in Mississippi State history, improved to 2-4 in bowl games with the Bulldogs and 8-6 overall. Slocum, who has won 78 percent of his games at Texas A&M, fell to 2-8 in bowls.

About 30 minutes before kickoff snow blew into Shreveport with strong wind whipping from one end zone to the other.

The game started with the synthetic grass field a mix of green and white. By the second quarter, the turf was blanketed by snow. Plows were used during timeouts to make the goal lines, end lines and hash marks visible.

Snow fell throughout the game, at times coming down so hard it made watching the game like looking through television static. Many of the 36,974 fans at Independence Stadium left at halftime.