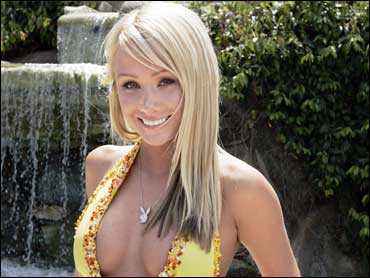 The petite 23-year-old blonde beat out 11 other beauties to become the magazine's 48th Playmate of the Year.

Her title and the start of her yearlong reign were celebrated Thursday with a backyard luncheon under a tent at Hugh Hefner's famous Playboy Mansion, with the yard filled with current and former playmates, more than 50 dating back to the 1950s.

Hefner called the event "one of my favorite days."

As founder and editor of the magazine, he helps select the annual honoree with advice from his promotions and photo staffs and oodles of input from readers. And what they're looking for, he said, has been "essentially the same" since the first Playmate of the Year was crowned in 1960: "Women are a little healthier, a little slimmer, but it's always been, and was from the very beginning, the girl next door."

Underwood looked all that and more (and in the pink of health) Thursday, in a low-cut, formfitting bright yellow dress.

Playboy photographers first met her as a college student when they visited Oregon State University looking for candidates for the "Girls of the Pac 10" pictorial. She ended up on the cover of the October 2005 issue. She went on to pose for the centerfold of the July 2006 issue.

Underwood said she never modeled before appearing in Playboy.

"I didn't think I was pretty enough," she said. "I'm 5'3", short, freckle-faced. I'm from Oregon. It wasn't a thought in my mind that I could do something like that."

Hefner described her as an "all-American beauty," but that's not all that's required to be Playmate of the Year.

"It has to do with personality," he said, adding that the honoree represents the magazine and its advertisers at personal appearances all over the country.

After her coronation luncheon, Underwood heads to Louisville, Ky., where she will host Playboy's Kentucky Derby party.

"It's incredible to get to experience a different life," she said. "I was in a very small bubble where I came from."