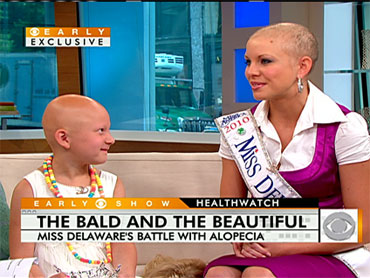 Martell has been bald nearly ten years, but she hasn't let that stop her from going for her dreams. After five years, she was crowned Miss Delaware on June 12, and her biggest was inspiration, a five-year-old girl named Lilliana Hakim, who suffers from the same disease.

Both Kayla and Lilliana appeared on "The Early Show" Monday to discuss their stories with co-anchor Erica Hill.

Kayla began losing her hair at the age of ten. In fifth grade, she noticed that her part was widening, and when the bald spot kept growing, she was diagnosed with alopecia. But she handled it with grace, especially through her adolescent years.

"For me, I was just very confident in myself because of the great family and friends that I have. And, you know, I think I was a better person because of the faith that I had. It didn't make me nervous to go out without the wig for any reason," Kayla said.

But she still wears a wig sometimes, because she feels more approachable that way.

"I think I can be a better Miss Delaware and Miss America by taking the wig off, because it shows people the initial reaction that I am healthy and I'm fine. All we do is we lose our hair, right?" Kayla asked rhetorically.

She gladly took it off during "The Early Show" to show how comfortable and confident she is.

But she almost walked away from her Miss America dreams -- until Lilliana told her she couldn't give up.

When Hill asked Lilliana how she'd inspired Kayla, Lilliana gave a smile and a nod, but was too shy to answer.

"Do you remember what you said to me when I said I didn't know if I wanted to come back to Miss Delaware?" coaxed Kayla. "Do you remember you told me that I was your Miss America and I had to keep trying, right?"

And keep trying, she did. Kayla has competed without her wig twice now. She won the title with it. "But, you know, when I competed without the wig, it was great because I was really representing who I am," she said.

When Kayla was crowned, Lilliana got to play a very special part on-stage.

"What did do you at Miss Delaware?" Kayla gently asked Lilliana. "Did you walk on the stage with me in an evening gown? Yeah, she and her sister both escorted me in my evening gown."

But Kayla doesn't think she won because she happened to have hair on that night. Asked if she thinks her win has anything to do with the fact that she competed with a wig this time around, she responded, "Not at all. I hope the judges picked me because I knew I could fulfill the jobs of Miss Delaware."

After Kayla's win, her inspiration, Lilliana, got to try on the crown along with all her friends at camp, which caters to children with alopecia.

Lilliana nodded and smiled when Hill asked her if perhaps one day, she hopes to be like Kayla and compete for the Miss America title.

But for Kayla, the next step is to use her new position to raise awareness about the disease, and those who have it.

"The biggest thing is just to find other people out there who have alopecia," she said. "If you find someone who can be supportive of you and you can learn from, that's the greatest thing, to build relationships, and that's why I'm so happy Lilly and I can be close."