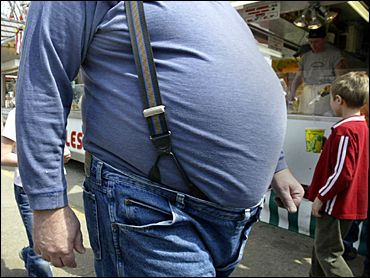 A lawmaker in the fattest state in the nation says he wasn't trying to offend anybody by filing a bill that would ban restaurants from serving food to obese customers.

He says he never even expected his plan to become law.

"I was trying to shed a little light on the number one problem in Mississippi," said Republican Rep. John Read of Gautier.

"It was a far-reaching bill, but you're trying to get people's attention to study the proper motive of obesity which is a concern to all of us," Read told CBS News'The Early Show. "Sometimes you have to go a little extreme to get the dialogue started."

Mississippi is the first state where more than 30 percent of adults are considered obese, according to a 2007 study by the Trust for America's Health, a research group that focuses on disease prevention.

The state House Public Health Committee chairman, Democrat Steve Holland of Plantersville, said he is going to "shred" the bill filed by Read and two other House members, Republican Ted Mayhall of Southaven and Democrat Bobby Shows of Ellisville.

"While I appreciate the efforts of my fellow House members to help curb the obesity problem in Mississippi, this is totally the wrong approach," Holland said in a news release, reports the Jackson Clarion-Ledger.

Public Health and Human Services Committee Chairman Steve Holland said today he will "pocket veto" House Bill 282, which means it will die in a subcommittee this week.

"It is too oppressive for government to require a restaurant owner to police another human being from their own indiscretions," Holland said Monday.

Still, in a state where lunch buffets are laden with fried chicken and butter-soaked vegetables, Holland said he understands the intentions of the bill's sponsors.

"Certainly, I can identify," Holland said. "I'm obese myself."

The Center for Consumer Freedom, a Washington-based nonprofit group supported by restaurants and food companies, blasted the no-serve bill in Mississippi.

"Give me a break," J. Justin Wilson, a senior research analyst for the group, said Monday. "Bills like this strip personal responsibility out of the obesity equation. Frankly, that's the only solution to the problem."

Jackson restaurant owner Al Stamps said it is "absurd" for the state to consider telling him which customers he can't serve. He and his wife, Kim, do a bustling lunch business at Cool Al's, which serves big burgers - beef or veggie - and specialty foods like "Sassy Momma Sweet Potato Fries."

"There is a better way to deal with health issues than to impose those kind of regulations," Al Stamps said as reggae music played in the background. "I'm sorry - you can't do it by treating adults like children and telling them what they can and cannot eat."

Mississippi has not ignored its obesity problem. For more than a year, one of the state's largest health insurance companies, BlueCross BlueShield of Mississippi, has aired TV ads with Republican Gov. Haley Barbour urging people: "Let's go walkin'." And a 2007 state law requires at least 150 minutes of physical activity instruction and 45 minutes of health education instruction each week for students in kindergarten through 8th grade. Until then, gym class had been optional.

"I think it's definitely a publicity stunt and a troublesome one," Joseph Nadglowski, president of the Obesity Action Coalition told The Early Show. "We are not going to help those affected by obesity by further discriminating against them."

"Unfortunately, there's this view that if you stigmatize someone who's obese or you discriminate against them, you're going to help them lose weight," Nadglowski said. "But research actually shows this is absolutely not true."

Read, a pharmacist, acknowledges he would have a tough time at restaurants if his bill were to become law - he said he is 5-11 and about 230 pounds. Even though the bill will die, Read said he hopes he has created serious discussion about an expensive public health issue.

Woman's dog saves her from mountain lion attack
Thanks for reading CBS NEWS.
Create your free account or log in
for more features.
View CBS News In
CBS News App Open
Chrome Safari Continue
Be the first to know
Get browser notifications for breaking news, live events, and exclusive reporting.