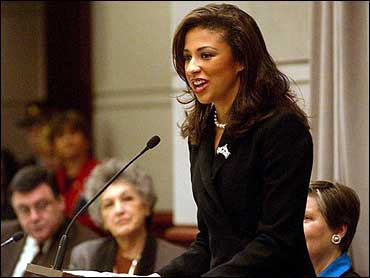 There's nothing like a controversy over sex to get them worked up at the headquarters of the Miss America Pageant. The latest furor, though, has to do with NOT having sex.

Miss America Erika Harold is insisting on promoting abstinence during her yearlong reign, to the chagrin of the pageant. Conservatives have rallied to her cause and accused the pageant of hypocrisy, giving the Miss America organization the kind of clobbering it usually gets from the left.

"In an age where beauty queens are regularly disqualified for inappropriate behavior, who would have thought a virtuous one would be silenced for her virtue?" said Sandy Rios, president of conservative group Concerned Women for America.

Harold, 22, of Urbana, Ill., was a well-known abstinence advocate before she won the Miss Illinois title on her third try. Each year, she chose it as her platform and made speeches to schools on behalf of Project Reality, a Chicago nonprofit organization that promotes abstinence.

But like the other Miss Illinois contestants, she signed a contract in which she agreed to adopt a youth violence platform if she won the state pageant and advanced to Miss America.

When she stood on stage Sept. 21 at the Miss America Pageant, she talked about her plans to go to Harvard Law School and answered a question about her youth violence platform. She never mentioned abstinence.

After winning the crown, though, she told pageant officials she planned to talk about chastity as she toured the nation. She was told not to. But in an Oct. 8 appearance at the National Press Club in Washington, she declared, "I will not be bullied."

Miss America chief executive George Bauer said the pageant just wanted her to do what she promised, which was stick with the platform she won on.

"It's very important to her, and I applaud people with a strong belief," Bauer said. "However, it was not the platform she competed on. She competed on the Illinois platform."

After two days of discussions with pageant officials last month, Harold prevailed, persuading the pageant to let her talk about abstinence in addition to youth violence.

"The hallmark of the Miss America Organization is its empowerment of young woman to speak their mind on a variety of issues," she said. "I was troubled by the fact that there was opposition from some that are affiliated with Miss America."

In Miss America contestant circles, abstinence - as a platform issue - is a well-known turn-off. Contestants have been discouraged from espousing it for fear of alienating pageant judges.

Sex has always been a touchy subject for the pageant. Pageant officials were mortified in 1984 when sexually explicit photos of reigning Miss America Vanessa Williams appeared in Penthouse; she was forced to relinquish her crown. Last summer, Miss North Carolina resigned under pressure after her ex-boyfriend claimed to have topless photos of her.

"The pageant is very concerned about appearing relevant and they're aware there's a media bias on this issue of abstinence," said chastity advocate Mary Louise Kurey, 28, a former Miss Wisconsin who was discouraged from talking about the issue at the 1999 Miss America Pageant.

Rios said the Miss America organization's stand "betrays a hidden agenda of political correctness and religious bigotry among pageant officials. They are attacking Erika Harold's values, which goes completely against what everyone thought the Miss America pageant stood for."

Bridget Maher, family policy analyst for the Family Research Council, said the pageant was undermining its own efforts to promote women in seeking to muzzle Harold's pro-abstinence views.

"By encouraging young people to abstain from sex until marriage, Miss America is teaching them not to view women as sex objects but to value them as people," Maher said.

So far, Harold said, she has spoken only about youth violence, with the exception of answering a question about abstinence that was posed to her by a student. But one school has booked her to speak about abstinence and she said she expects others will, too.