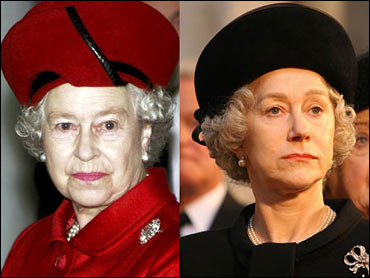 Actress Helen Mirren has declined an invitation from the queen to attend dinner at Buckingham Palace because of a working engagement in South Dakota that she can't change.

The actress played the British monarch in the 2006 film "The Queen" and won the best actress Oscar for the role.

"I was honoured to be invited to dinner at the Palace. This was a gracious gesture and very appreciated by me. It was therefore hard to have to decline. I was contracted on that date to be working in South Dakota, in a situation which was impossible to change," Mirren said in a statement released by her publicist, Stan Rosenfield, on Wednesday. "I would have made every effort to attend if it had been humanly possible. I explained this to the Palace officials, and I believe they understood. I would never have the hubris or the rudeness to insult anyone who had the kindness to invite me to dinner."

The production company behind the project released a statement that said they are unable to release the actress from her shooting schedule.

"The 'National Treasure: Book of Secrets' production company regrets that it was unable to release Ms. Mirren from her shooting schedule in order to accept the honor of dining with Queen Elizabeth last week," the statement says. "All attempts were made to accommodate Her Majesty's request but a very challenging and uncompromising production schedule in South Dakota, complicated further by poor weather conditions and locked-in locations, made this impossible."

Mirren plays a character named Emily Appleton in the film, which is due later this year.

"Ms. Mirren has only the greatest admiration and respect for the Queen, and is truly sorry that prior commitments to the production prevented her from accepting the Queen's kind and prestigious invitation," the production company said.

The queen wrapped up her six-day visit of the United States on Tuesday.
By Amy Bonawitz