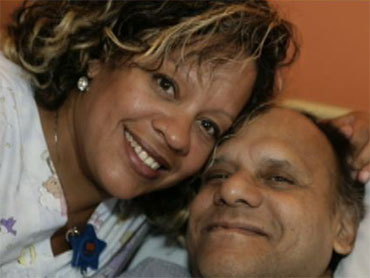 A remarkable twist of fate reunited a dying cancer patient with the daughter he hadn't seen in 41 years at the hospice hospital where she is a nurse.

Victor Peraza arrived at Calvary Hospital in the New York City borough of the Bronx ten days ago, and the only available bed was in nurse Wanda Rodriguez' unit.

The new patient bore the same name as Rodriguez' father, who left her family when she was an infant.

It turned out that patient and nurse are indeed father and daughter.

In an interview with "Early Show" co-anchor Harry Smith, Rodriguez described how it all happened, and displayed an amazing amount of forgiveness, telling Smith she opened her heart to him despite what happened because that's "the type of person I am. It's not in my nature to hold a grudge.

"I like peace. I like to make people happy. I couldn't imagine my father being one of (my) patients and just turning him away," she said. "I'm here 23 years. I try to provide the best of care to my patients. And who would have ever thought my dad was going to be one of these patients?"

He had no family to speak of when he was admitted, and now has met Rodriguez' entire family, including her children. She calls it a "total blessing. I feel blessed. I feel that this was a spiritual gift God gave me, and God brought him to me. This is the way it was supposed to happen. It was fate. … There's closure."