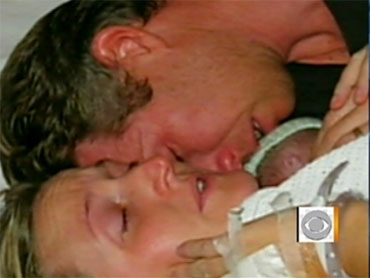 A family in Australia is rejoicing thanks to a treatment known coincidentally as the "Kangaroo Care Method."

Kate Ogg gave birth to premature twins, only to be told that her son, Jamie, had no vital signs.

Instead of giving up, she put the baby in position against her chest and, miraculously, he started stirring minutes later and, after two hours, he opened his eyes.

CBS News Correspondent Richard Roth told the story of the Miracle Down Under on "The Early Show on Saturday Morning":