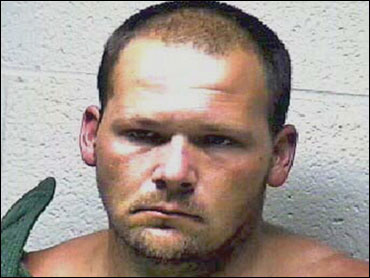 (AP Photo)
Jacob Shaffer's Tennessee Bureau of Investigation booking photo. Shaffer is held on charges of murdering six, including his estranged wife and her family.

FAYETTEVILLE, Tenn. (CBS/AP) It's not yet clear what went through the mind of the killer who murdered an entire Tenn. family, but left a 4-year-old child alive and unharmed in the house.

Police say Jacob Shaffer, 30, is responsible for the murder of six: his 38-year-old wife, Traci Shaffer, her father, brother, teenage son and a neighbor in rural Fayetteville. He also is charged with a killing in Huntsville, Ala., some 30 miles south. That murder might have been the first.

But a family friend, James Wilson, said police told him Jacob and Traci Shaffer's 4-year-old daughter was home at the time of the murders, but completely unscathed. Everyone else in the house was shot to death in cold blood.

Wilson said he's the boyfriend of Traci Shaffer's sister, Jennifer, who is devastated by the loss of her family.

"She's not handling it and I can't blame her," he said. "What can you say to someone who has lost everybody?"

Traci Shaffer, her son, Devin Brooks, and neighbor, Robert Berber, both 16, were found dead Saturday in her home in rural Fayetteville, said Tennessee Bureau of Investigation spokeswoman Kristin Helm. The bodies of Traci Shaffer's brother, Chris Hall, 34, and father Billy Hall, 57, were found in a home across the road.

The Shaffers were no longer sharing a home but had not filed for separation, said the 29-year-old Wilson, who was gathering belongings from Traci's house in Lincoln County.

"As far as seeing him do something like this, you just can't see it," Wilson told The Associated Press Sunday. He said the Shaffers had "gotten into it" before as far as fighting, but he never would have expected such violence.

Wilson said he met Jacob Shaffer when they were installing drywall, but they had stopped being friends about a year and a half ago.

Shaffer was still installing drywall around Huntsville, and Billy Hall had been driving him back and forth to work before the couple split, Wilson said. The sixth victim was found at Hall Cultured Marble Granite, which Hall's family owns, Wilson said. The business was closed Sunday.

"Her dad done everything he could for Jacob," Wilson said. "I have no idea why he walked across the street to her daddy and her brother. Her daddy never done anything wrong."

Helm said Jason Shaffer's motive was domestic, but authorities have not released a chronology of the killings or many details, including how the six died.

Traci's slain son and a 9-year-old daughter, who wasn't home during the killings, were from a previous relationship, Wilson said. Her sister was trying to figure out how to pay for her family's funeral, he said.

Jacob Shaffer of Fayetteville was being held without bond at the Lincoln County Jail and no lawyer for him was listed.

Lincoln County Sheriff Murray Blackwelder said Saturday that his department was investigating three crime scenes and would not confirm the causes of death in what he called "horrendous" killings. Autopsies were performed Sunday but no results were released. Wilson said police wouldn't tell him how the family was killed.

Helm said the family died Friday night or early Saturday and that Jacob Shaffer was sitting on the porch of one of the houses when authorities first arrived. Huntsville police said information from him led them to the body at the granite business. They have not released the name of the sixth victim.

Fayetteville is a town of 7,000 people about 90 miles south of Nashville near the Tennessee-Alabama border.