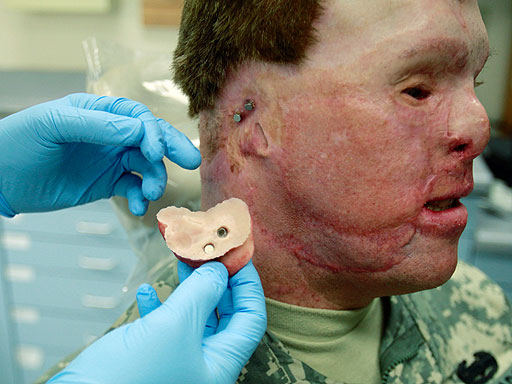 (CBS) Nine years into the war in Afghanistan and seven in Iraq, a little known laboratory in San Antonio is giving horribly disfigured soldiers hope as they face their new lives.

The lab on Lackland Air Force Base is one of two major facial prosthetic programs in the Defense Department, and it has seen an unprecedented new stream of wounded soldiers.

Master Sgt. Todd Nelson is one of them.

He lost his right eye and ear in a flash when a car bomb in Afghanistan exploded, sending fire up his arm and over his head.

After years of painstaking work, the military has given him a bright blue eye and ear lightly freckled and pinked from summer sun. They're not flesh and blood, but the glass and silicone replicas are so realistic, so perfectly customized, that they've given Nelson something else: the ability to face the world without shocking it.

Before the wars, the 26-year-old lab's patients were almost exclusively cancer and civilian trauma survivors. Wounded warriors now make up about one-fifth of the roughly 425 patients they treat each year.

Using specially designed computer equipment, technicians can turn an MRI into three-dimensional molds and create custom-fit pieces to replace missing jaw bones or sections of skull for implant. The lab has even done it remotely, creating a perfectly fitting replacement for one-third of a patient's skull at a hospital in Balad, Iraq, Villalobos said.

For Nelson, a 37-year-old Army mechanic from Evergreen, Colo., who battled through 43 surgeries so far, it was all about his missing ear.

To create prosthetic ears, the lab uses cameras that generate 3-D images for technicians to make molds. Adhesive can be used to keep them in place but Nelson opted for titanium implants that allow the prosthetic to magnet on.

When a patient has one ear remaining, a mirror-image ear is created. Two missing ears are more difficult, said Villalobos, but the lab has created ears using family members as models.

Skin tone is matched using powdered pigment and tiny red and blue embroidery threads to create the visual effect of veins. Freckles are painted on, and tops of ears are pinked to mimic sun exposure. Some soldiers get "summer ears" and "winter ears" to account for skin-tone variation.

Nelson's ear took two years to construct, in part because scar tissue prevented the implant from staying in place.

But Nelson says it's all been worth it.

"I do feel like I have the best-looking one ever made," he smiled.