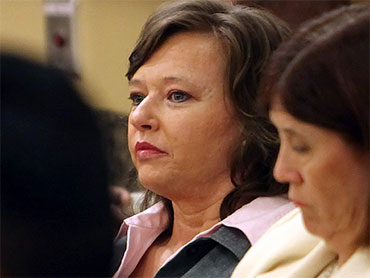 TUCSON - A woman went on trail Tuesday in Arizona accused of gunning down a 9-year-old girl and her father in their own home. The story was overshadowed by news of President Obama's big speech and by the other Arizona shooting which has gripped the nation, but it's no less shocking.

Prosecutors say she organized a raid on the home of Gina Gonzalez and her husband Raul Flores on May 30, 2009. Forde allegedly believed Flores was involved in drug trafficking and that she and her associates would be able to seize cash or drugs in order to help fund their patrol efforts.

According to police, Forde led the raid, shouting order to two male accomplices (who will stand trial in March) during which Raul was shot multiple times and killed. Gina Gonzalez was shot twice, but survived to hear her daughter, Brisenia Flores, plead for her life before being shot twice and killed.

CBS News affiliate KOLD reports that the trial began Tuesday in Tucson with vivid testimony from Gonzalez herself.

"I can hear it happening. I can hear her telling him to 'please don't shoot me,'" said the bereaved mother through tears, recounting the moments before she lost her daughter.

Click the video player below for KOLD's report on the trial.

Forde's defense argues that she wasn't even at Gonzalez's house on May 30, 2009. Attorney Eric Larsen told the court on Tuesday the case against his client was, "a donut - a lot of circumstantial evidence all around, but there is a hole ,and that hole is Shawna Forde not being in that home on May 30th."

Prosecutor Kellie Johnson responded in her opening remarks: "Not only will the state prove to you that Shawna Forde was in that house that night, barking orders and telling people what to do, the state will prove that Shawna Forde organized and planned this offense."

Forde was a member of the much larger Minuteman Project for some time, though that group's leader, Jim Gilchrest, has insisted his relationship with the shooting suspect was never "extensive".

A reporter for Forde's hometown paper in Washington state, however, wrote in 2009 of apparent email evidence suggesting Gilchrest and Forde had become at least close acquaintances through their work - often praising each other as dedicated soldiers in the war against illegal immigration.

Brian Levin, director of the Center for the Study of Hate and Extremism at California State University-San Bernardino, told the Associated Press in 2009 that Forde was a familiar name in the anti-illegal immigration community.

"She's someone who even within the anti-immigration movement has been labeled as unstable," Levin told the blog. "She was basically forced out of another anti-immigrant group, the Minuteman Civil Defense Corps, and then founded her own organization."

Gonzalez maintains that she was unaware that her husband may have been involved in drug running activity. There were no drugs or large amounts of money found in their home in the Arizona border town of Arivaca.

The Arizona Daily Star reports that there have been some discrepancies in the statements Gonzalez has made to investigators - reportedly telling them the woman who invaded her home was a brunette, when Forde is blonde. She also claimed that some items of jewelry found in the possession of the suspects had belonged to her, but one bracelet she said was stolen from her home was apparently purchased by a suspect on eBay.

Click here for a full report on the trial from the Arizona Daily Star.

Under Arizona law, Forde could face the death penalty if convicted of first degree murder.