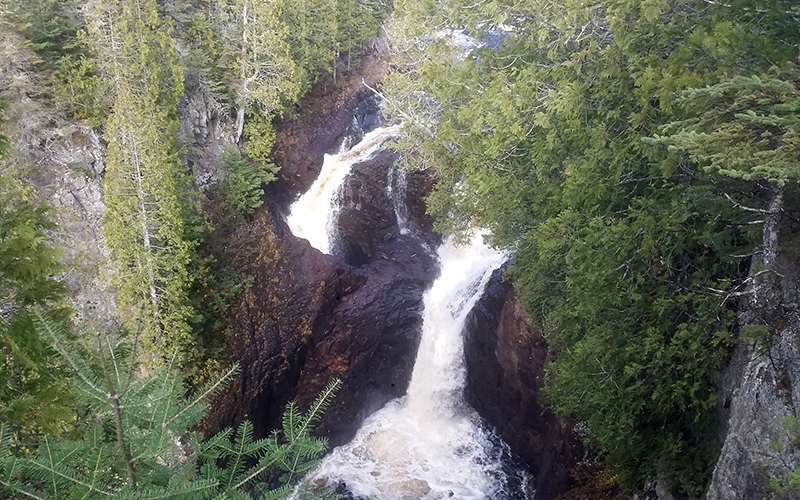 But one scene in particular has mystified visitors and scientists for decades: Devil’s Kettle, a waterfall located in Judge C.R. Magney State Park.

Water in the left fork of the waterfall in Brule River appears to simply vanish into a large hole in the rock below, according to CBS Minnesota, which previously looked into the mystery in 2012. Some believe that the water flows underground and empties into Lake Superior.

Over the decades, visitors and scientists have tossed in logs and even dye in hopes of tracing the water’s flow. Nothing ever surfaced.

Alexander suggests thinking of the kettle as nature’s giant blender. The water is churning around the hole in the rock with such power and force that it essentially shreds whatever material enters the pool.

Still, the questions remain: What happens to the flowing water and where does it exit to the surface water?

To find out, Alexander and hydrologist Jeff Green from the Minnesota Department of Natural Resources measured the water volume of the river just before it plunged into the falls and compared the results to the volume at the bottom.

What they discovered is that the volume at the top and bottom of the falls is nearly identical, meaning the water pouring into the kettle must flow back into the river. Their observation essentially debunks the myth that the water is taking an alternative route underground to Lake Superior.

To help visualize their observation and measurements and to show the location of where the water is re-entering the Brule River, the scientists plan on pouring a bright green dye into the falls above:

They are betting that it will turn the river water directly below the same color, proving that the exit to the kettle is merely a short distance away.

“It’s cool, it’s neat,” Alexander said. “We now know something we didn’t know before. That’s what turns a scientist on.”