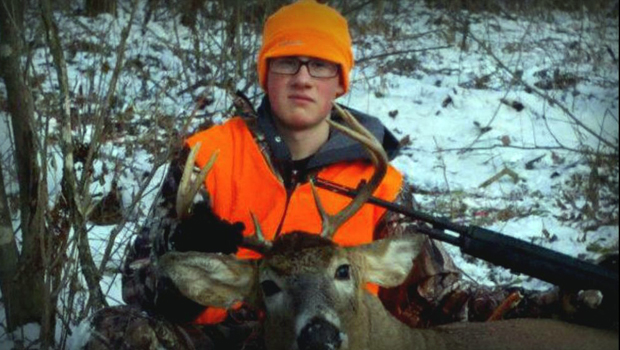 WASECA, Minn. -- Authorities said Thursday that they prevented an "unimaginable tragedy" by foiling a teenager's elaborate plot to kill his family and bomb the junior and senior high school in the southern Minnesota city of Waseca.

Police arrested John David LaDue, 17, on Tuesday and charged him in juvenile court Thursday with four counts of attempted first-degree murder, six counts of possessing explosive or incendiary devices and two counts of criminal damage to property. The charges say he told police he intended to kill "as many students as he could."

Prosecutors are seeking adult charges against LaDue. KTOE-AM reports that Waseca County prosecutors filed a motion Friday asking that the teen be charged as an adult. A hearing is set for May 12.

Capt. Kris Markeson told reporters authorities believe LaDue was acting alone and would have carried out the attack in the next few weeks if he hadn't been caught.

Markeson said he was disturbed by the amount of guns and other material the youth obtained. He said he could not divulge if specific students were targeted. He said police were tipped by a resident who reported a suspicious person at a self-storage facility.

School Superintendent Thomas Lee said the 11th-grader was known to school officials but they had no major issues with him. He said teachers tried to reach out to LaDue, but he was shy.

"We have escaped what could have been a horrific experience," Lee said.

The investigation began in late March after three small explosive devices were discovered at an elementary school playground in the city of 9,400 people, about 80 miles south of Minneapolis. LaDue allegedly admitted setting off practice bombs there.

According to the charging documents, The Free Press of Mankato reported, LaDue kept a 180-page notebook that detailed his plans. He allegedly told police he planned to shoot his mother, father and sister, then start a fire in a rural field to distract first-responders while he went to the school to set off pressure-cooker bombs in the cafeteria. He also allegedly planned to throw Molotov cocktails, gun down students and kill a school liaison officer while he helped injured students.

LaDue said his ultimate goal was for a SWAT team to kill him.

Police got a break Tuesday with the tip. An officer found LaDue in a storage unit that had numerous materials that could have been used to make bombs.

According to the documents, LaDue was initially defensive but told officers he would tell them what he was doing if they could guess correctly. When an officer guessed he was making explosive devices, LaDue allegedly said "Yes" and agreed to speak. He allegedly told police he would have shot the responding officer if he had brought a gun to the storage unit.

LaDue made his first court appearance Thursday and was sent to a juvenile detention center in Red Wing, the Star Tribune of Minneapolis reported. His next court date is May 12.