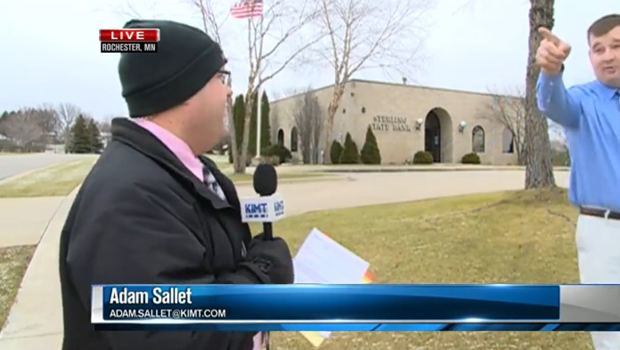 Reporter Adam Sallet from CBS affiliate KIMT-TV of Mason City, Iowa, was beginning a live report Tuesday morning outside of a Sterling State Bank branch about a string of robberies in Rochester, Minnesota.

Just seconds into his report, a bank employee runs up and interrupts Sallet to tell him a bank robber had just struck.

"It's that guy right there," the bank employee said.

A surprised Sallet, who was most likely running his own camera and audio at the scene, rolls with the punches.

Sallet then runs off camera, ending the live report. The robber was never seen on camera.

Sallet tweeted Tuesday afternoon that a suspect was in custody and the suspect was likely the same person who tried to rob that bank on Monday.