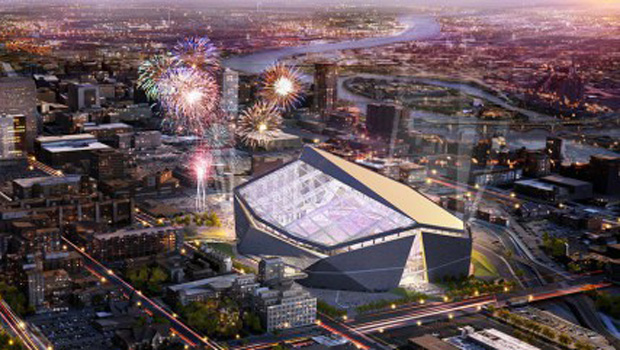 ATLANTA - Minneapolis will host the 2018 Super Bowl after a vote by owners on Tuesday rewarded the city for getting a new stadium deal.

The owners chose Minneapolis and the new $1 billion stadium planned for the site of the old Metrodome to host the championship over New Orleans and Indianapolis.

"The new stadium was absolutely the deciding factor," Jay Cicero of the New Orleans bid committee said. "Any time that there is so much public support for a $1 billion stadium, the NFL owners are impressed.

"We did everything we were supposed to do, had a fantastic presentation. In the end we think the stadium did it."

The big game will be staged in the Twin Cities for the second time. It was there in 1992, when Washington beat Buffalo.

"We appreciate the collaborative effort from Minnesota's business and community leadership in putting together this winning bid," Vikings owner Mark Wilf told CBS Minnesota. "It was evident to me and my brother Zygi that the other NFL owners were extremely impressed with everything Minnesota had to offer, and we have no doubt they will be even more excited with what the community will deliver in February 2018."

New Orleans has staged the Super Bowl 10 times, tied with South Florida for the most, but its bid might have been damaged by the blackout that interrupted the 2013 title game. Indianapolis had it in 2012.

Next year's game is in Glendale, Arizona, followed by Santa Clara, California, for the 50th Super Bowl, then Houston.

Earlier at their spring meetings, NFL owners tabled any vote expanding the playoffs to 14 teams.

There is strong sentiment among the owners to add a wild-card team in each conference to the postseason, most likely beginning in 2015. Such a setup would eliminate one of the first-round byes, with only the team with the best record in each conference getting a week off at the beginning of the playoffs.

New York Giants owner John Mara, who is against adding more playoff teams, said the topic probably will come up for more discussion in October.

"I don't think it's a sure thing at all," Mara said of going to 14 playoff teams. "It's probably more likely than not, but nothing is set in stone. There was no straw poll taken. ... I think it's good the way we have it."

The players' union says it needs to be consulted on an expanded postseason, and Mara said that would happen at some point if the owners decide to expand the playoff field.

A committee examining the time, length and site of the draft reported to the owners. Commissioner Roger Goodell has said the league is considering several options:

-keeping the draft in May; it drew record TV ratings this year after it was moved back two weeks from its usual late April slot.

-moving it from its traditional spot in New York to a variety of NFL cities, with a dozen already having expressed interest.

"If I was king of the world, I'd put it right back where it was," Mara said, referring to the April dates.

Among other chores, the three new hires will serve as liaisons to league coaches and front-office personnel.

"These men bring sound wisdom, football experience and insight that helps us support our clubs and coaches, as well as grow and develop our players and game," Vincent said.