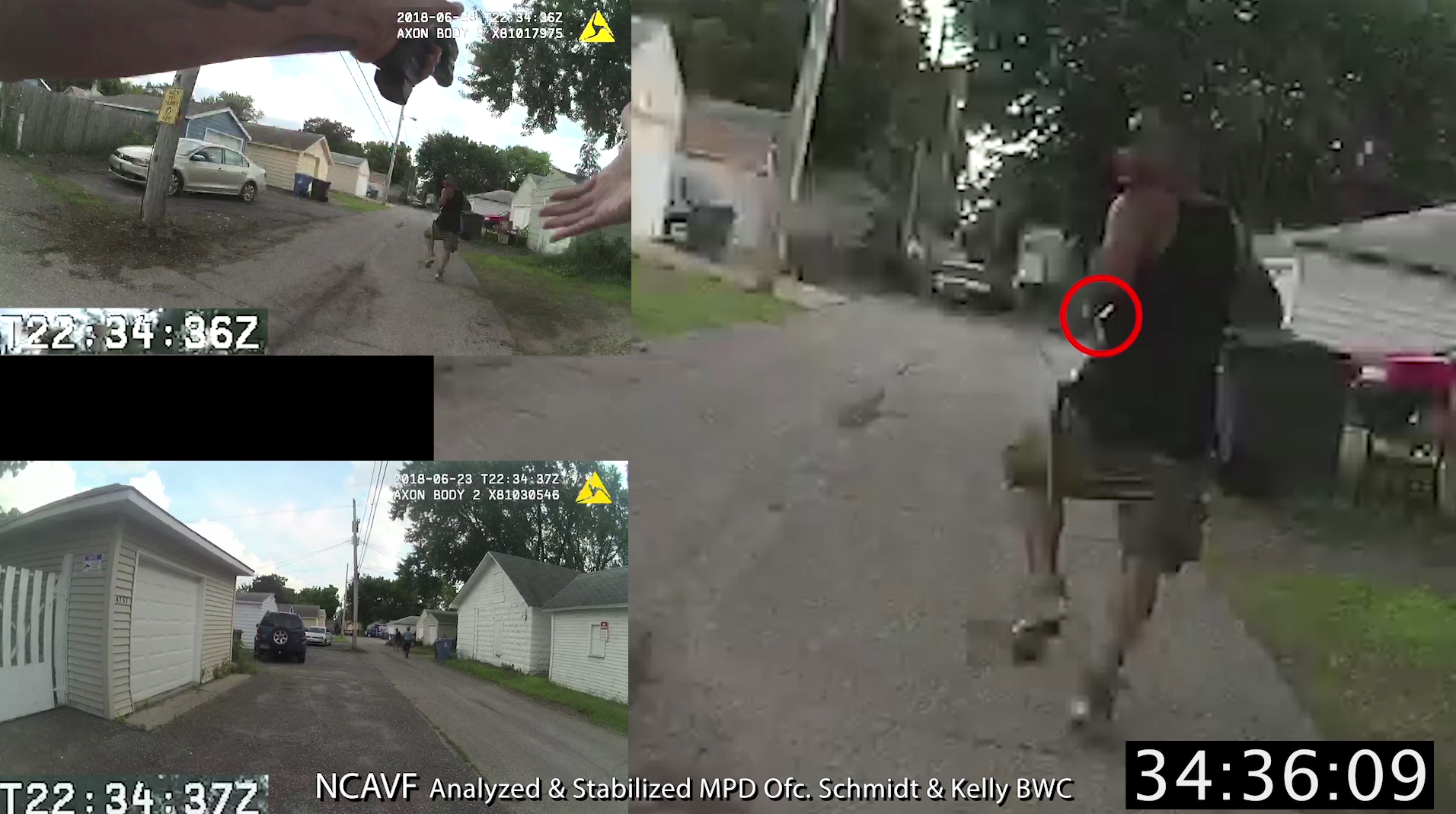 MINNEAPOLIS -- Authorities in Minneapolis released body camera video Sunday from two police officers in the fatal shooting of a 31-year-old black man. The graphic footage shows Thurman Blevins shot from behind after a frenetic foot chase and what appeared to be a gun in his hand.

Officers Justin Schmidt and Ryan Kelly were responding to a 911 call of a man firing a gun into the air on the city's north side June 23. The video shows them pulling their cruiser up and a man -- Blevins -- seated on a curb near a woman with a child in a stroller. As the officers pull up, one says, "He's got a gun!" Blevins jumps up and runs, as the officers yell "Stop, stop! Put your hands up! I will (expletive) shoot you!"

In a chase that takes less than a minute, Blevins yells back, "I didn't do nothing bro," ''Please don't shoot" and "Leave me alone." An enhanced version of the video has a red circle drawn around Blevins' hand to highlight what appears to be a gun.

After the chase turns down an alley, Blevins is shot, still running.

Investigators have said the officers arrived to find Blevins sitting with a woman on a curb before he ran, carrying a black and silver gun. A gun was recovered at the scene. Some witnesses had disputed Blevins was armed, saying he was carrying a bottle or a cup. He appeared to have something in each hand when he first ran.

A protest of Blevins' death was planned for Tuesday afternoon at the Hennepin County Government Center.

Community members have been calling for the release of the body camera footage since Blevins' death, CBS Minnesota reports. Minneapolis Mayor Jacob Frey promised to release the footage once the Bureau of Criminal Apprehension completed interviews with all key witnesses.

Frey said he believes in transparency, and that's what drove his decision to make the video public.

The mayor said Blevins' family viewed the video about an hour before it was released publicly. He called Blevins' death "tragic," but declined to comment on what the footage showed.

"I know that right now in our city there's a lot of pain," he said. "Pain in many cases that I cannot understand."

Sydnee Brown, a cousin of Blevins, told the Star Tribune that the video confirms her belief that he was not a threat to police.

"He didn't deserve to die," Brown said. "He wasn't a threat when (the officers) approached him. They didn't view him as a human being."

In Minnesota, investigative data is typically nonpublic until an investigation concludes. But state laws allow for the release of material like body camera footage if it's deemed a benefit to the public or if it dispels "widespread rumor or unrest."

The two officers are on paid administrative leave. Blevins' relatives previously called for both officers to face criminal charges.

Chief Medaria Arradondo released a statement after the video was released, saying he could not comment while the investigation is pending.

Kelly has been with the police department since 2013 and Schmidt joined in 2014. Both had served in the military and had been recognized numerous times for their work as police officers, according to redacted personnel files. They also both have had complaints against them: Kelly has had five complaints, all closed without discipline, while Schmidt has had three complaints against him, including two that were closed without discipline and one that remains open. Details about the complaints were not released.

CBS Minnesota points out that the Facebook group Justice for Thurman Blevins Jr. posted a response to the release of the video, saying the video shows that "Thurman Blevins begged for his life not to be taken by the Minneapolis Police Department."

Minneapolis has been rocked by two high-profile fatal police shootings in recent years, including the November 2015 shooting of 24-year-old Jamar Clark and last year's shooting of 40-year-old Justine Ruszczyk Damond. Officers in the Clark case were not charged, and trial is pending for the officer who shot Damond.