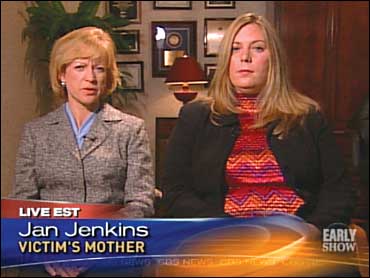 "Someone knows something, would you please do the right thing and step forward."

That was the cry for help from Chris Jenkins' mother, Jan, in a televised plea made in early November 2002. Their son had been at a Minneapolis bar with friends for a little Halloween revelry. It was the last time he was seen alive. After weeks of searching, the Jenkins returned to their Wisconsin home with no answers.

"We had one goal and that was to bring Chris home. It did not happen yet," said Steve Jenkins, Chris' father.

About four months later, Chris' body was found in the Mississippi River. Minneapolis police investigated and eventually closed the case, figuring it was a suicide or an accident. But the Jenkins didn't buy that.

"We need to continue our search to get answers," Steve Jenkins said at the time.

The Jenkins weren't satisfied with the assessment of the case made by police "because we knew Chris," his sister, Sara Lightner, told The Early Show co-anchor Julie Chen. "That's all we needed to know. There were some signs on the body and there are too many things to get into now, but more so than anything we knew Chris, we knew his character and we know this was not a choice of his."

Now, four years later, police are agreeing with the family. They say Chris was the victim of a homicide. He was thrown from a bridge. There is an eyewitness and a suspect.

"Certainly nothing can make up for the four years of sheer hell that we have walked," Jan Jenkins told Chen. "By the same token, we can't change the past of what has or hasn't happened. We believe it was a sincere apology and we accept it and we want to support the Minneapolis police to continue to do what they need to do to bring this situation to some kind of a conclusion."

The acknowledgment by police ended four agonizing years for the Jenkins family.

"It was horrific," was how Lightner described it to Chen. "You are talking about four years of investigating your son and brother's murder every which way it could happen, looking at autopsy photos, recovery scene photos. This is something a family should never ever have to do, but we made the choice that Chris didn't have a voice and we needed to speak for him. And that's what we did."

The Jenkins family wondered if it was the work of a serial killer. The Jenkins case was one of several in the Midwest of college students and other young adults who disappeared in recent years, often after nights out that involved drinking. Some of them were found dead in rivers, and there'd been speculation that there might be a link.

But investigators in the Twin Cities say that's not it, Jenkins' murder is not connected to any other case, reports Bridgette Bornstein of CBS station WCCO-TV in Minneapolis. But the question remains: What was the motive? Why did someone kill Chris Jenkins.

Lead homicide investigator on the case Sgt. Pete Jackson and Lt. Lee Edwards, head of the homicide unit, said they know many things they can't disclose yet because the investigation isn't over and only a few people have direct knowledge about the details. But Jackson said he received information from a source in 2005 who had heard a "tenth-hand" rumor. Jackson said he conducted several interviews across the country and slowly developed both a suspect and an eyewitness.

Jackson declined to disclose the motive for the crime, or even specify which bridge Jenkins was thrown from, but said neither man they're looking at knew Jenkins.