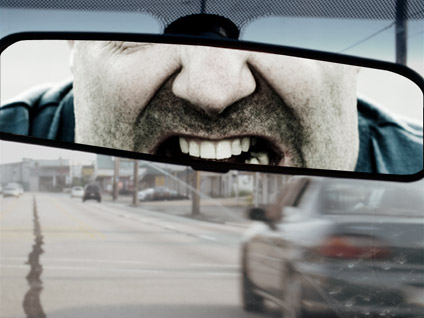 (CBS/WCCO) ALEXANDRIA, Minn. - A driver who let his anger get the best of him on a western Minnesota highway recently, allegedly aimed his anger - and a gun - at two off-duty sheriff's deputies.

"Dumb" and "dangerous" is how Sgt. Brad Brejcha of the Douglas County Sheriff's Department summed up what happened on Highway 27 Saturday, reports CBS station WCCO.

According to Brejcha, Scott Tarczon, 37, of Villard turned onto the highway at around 4:30 p.m. While driving west towards Alexandria, he was passed by another car and - for some unknown reason - lost his temper. According to the sergeant, Tarczon started swerving and tailgating the other car, and he then took his road rage a step further.

"All of the sudden, he displayed a handgun that they could clearly see," Brejcha told WCCO.

Tarczon apparently didn't know that the men he was waving his gun at were off-duty sheriff's deputies. After about a minute, he turned onto another road, so the officers turned around and began following him.

The deputies got his license plate number, called it into dispatch and on-duty deputies showed up at Tarczon's house a short time later. They arrested him and also found drugs in his car.

"It sounds like to me that he wasn't the most cooperative person in the world," said Brejcha.

Tarczon faces five criminal charges, four of them felonies for second-degree assault and terroristic threats, all for a minute of alleged road rage. He's in the Douglas County Jail, WCCO reports.

Sgt. Brejcha said the deputies did the right thing in this case: they called deputies who were on-duty, which is his advice to anyone who may be the target of a road rage incident.