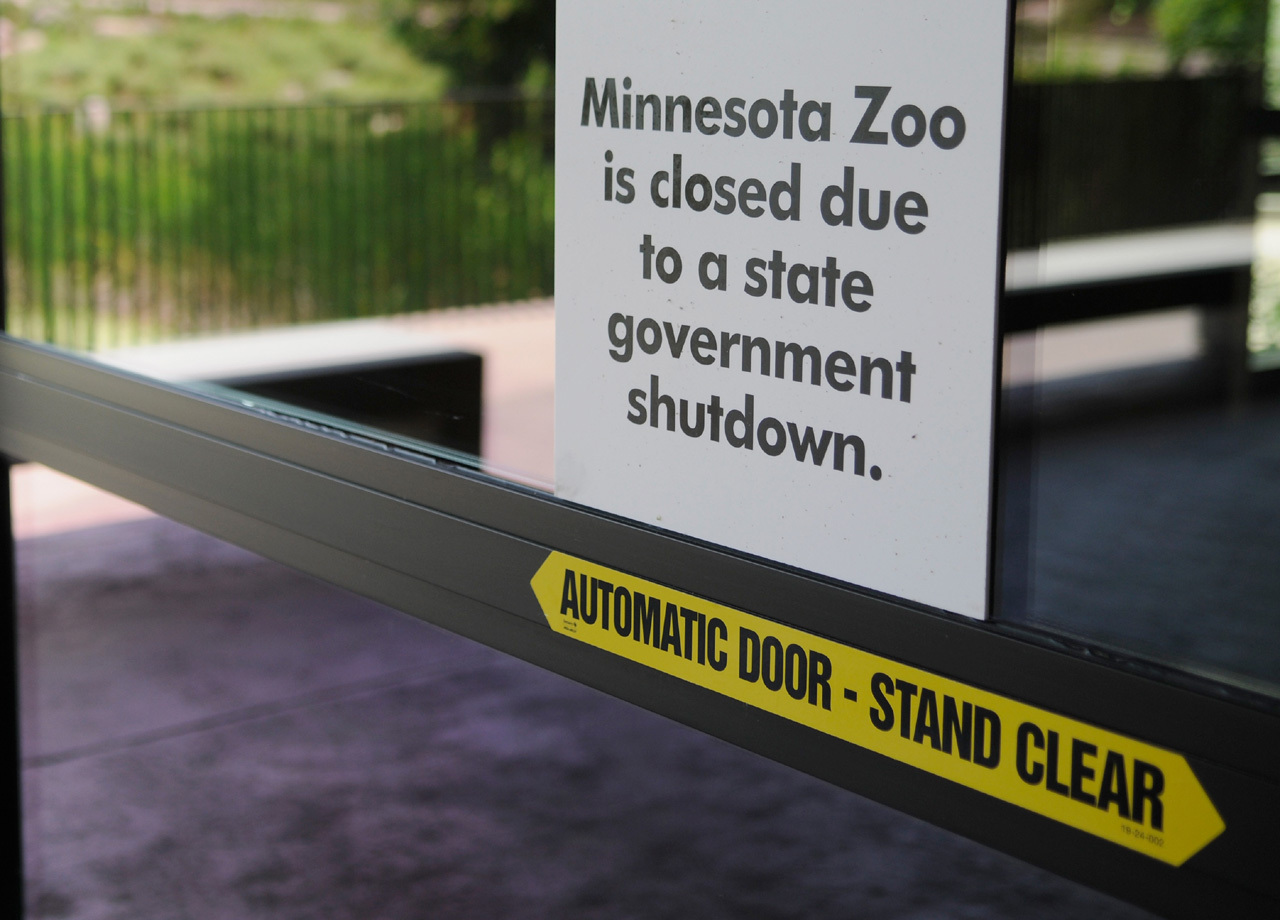 ST. PAUL, Minn. — It's not going to be much of a holiday weekend in Minnesota. State parks and museums are closed - the result of a budget standoff between the Democratic governor and Republican legislative leaders.

All highway rest areas are closed - and you can't get a fishing license.

Social services are cut, with 22,000 state workers are temporarily out of work. Poor families are scrambling after the state stopped child care subsidies.

Republicans who control the Legislature have refused to raise taxes to solve the state's $5 billion deficit.

Democratic Gov. Mark Dayton has insisted on tax hikes or some other way to raise more revenue.

Talks to end the deadlock are not expected to resume until Tuesday at the earliest.

How long the shutdown lasts will be determined, partly, by the reception legislators receive when they return to their home districts for the holiday weekend - facing voters for the first time since the government shut down.

In the absence of talks, the shutdown was rippling into the lives of people like Sonya Mills, a 39-year-old mother of eight facing the loss of about $3,600 a month in state child care subsidies. Until the government closure, Mills had been focused on recovering from a May 22 tornado that displaced her from a rented home in Minneapolis. Now she's adding a new problem to her list.

"It just starts to have a snowball effect. It's like you are still in the wind of the tornado," said Mills, who works at a temp agency and was allowed to take time off as she gets back on her feet — but after the shutdown also has to care for her six youngest children, ages 3 through 14, because she lost state funding for their daycare and other programs.

Minnesota is the only state to have its government shut down this year, even though nearly all states have severe budget problems and some have divided governments. Dayton was determined to raise taxes on the top earners to help erase a $5 billion deficit, while the Republican Legislature refused to go along with that — or any new spending above the amount the state is projected to collect.

Here, as in 21 other states, there's no way to keep government operating past the end of a budget period without legislative action. Even so, only four other states — Michigan, New Jersey, Pennsylvania and Tennessee — have had shutdowns in the past decade, some lasting mere hours.

The shutdown halted non-emergency road construction and closed the state zoo and Capitol. More than 40 state boards and agencies went dark, though critical functions such as state troopers, prison guards, the courts and disaster responses will continue.

Nonprofit groups helping the state's poor have already been hit hard. Some closed their doors immediately, while others continued services, at least for now. Some were looking at layoffs, said Sarah Caruso, president and CEO of Greater Twin Cities United Way, which funds 400 programs serving poor people. She said the impact will depend on how long the shutdown lasts.

"If we go well beyond that two-week window, I think then we will start seeing much more significant closure of programs to support the vulnerable, and the long-term financial viability of some of these agencies will really be called into question," she said.

So far, 30 agencies had accepted United Way's offer of advances on their grants, seeking cash to stay up and running.

The stoppage suspended some programs for the blind and visually impaired, including a radio reading service run by volunteers and training for blind people who are learning to walk with a cane. Bonnie Elsey, director of the state's Workforce Development Division, said a vocational rehabilitation program that places people with disabilities in jobs or school was halted.

Minnesota food pantries scurried to make sure they would still get 700,000 pounds of food — about 30 percent of their total volume — in the next two months through a federal program. Nearly a million pounds already in warehouses were also put on hold by the shutdown. Colleen Moriarty, executive director of Hunger Solutions Minnesota, said the federal program's operation depended on a single state employee working in a data management system. Later Friday, Moriarty said the employee had been called back to work.

The shutdown also idled a state hotline set up to help seniors and their caregivers find services, housing options, help with Medicaid and Medicare insurance and more. A call to the 800 number Friday got a recording saying callers could leave a message.

The political stalemate meant instant layoffs for 22,000 state workers, including Paul Bissen, a road and bridge inspector for more than 26 years. Bissen said he cut back on spending last month. He figured he could go a couple of months without worrying, but on the first day of the shutdown, he said it looked like his washing machine had died — adding another expense.

"I want to work. I've got road construction projects to build, to try to make them safe and make them smooth so people can get back to forth to their work," Bissen said.

Fearful of voter anger, both parties blasted each other for Minnesota's second shutdown in six years.

GOP Chairman Tony Sutton called Dayton a "piece of work" and accused him of inflicting "maximum pain" for political reasons.

Democratic-Farmer-Labor Party Chairman Ken Martin laid the blame on Republicans, saying they drove the state to a shutdown to protect millionaires from tax increases sought by Dayton.

The Alliance for a Better Minnesota, a left-leaning group supportive of Dayton, plans to run weekend radio ads in three popular vacation areas blaming Republicans for the impact of the shutdown, including closed state parks. The group also debuted a "Shutdown Shame" website.

The shutdown has been a slow-motion disaster, with a new Democratic governor and new Republican legislative majorities at odds for months over how to eliminate the state budget deficit. Dayton has been determined to raise taxes on high-earners to close the deficit, while Republicans insisted that it be closed only by cuts to state spending.

Even after the shutdown looked like a certainty, Dayton and Republicans did not soften their conflicting principles. Dayton said he campaigned and was elected on a promise not to make spending cuts to a level he called "draconian."