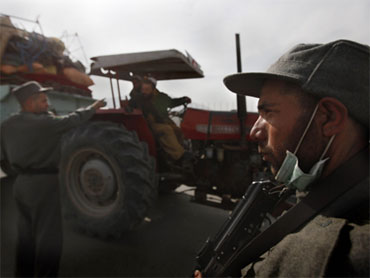 NATO would not comment on whether an airstrike had taken place.

Defense Ministry spokesman Gen. Mohammad Zahir Azimi said an Afghan army commando unit, district police members and foreign forces were in the base in the Bala Marghab district at the time of the airstrike Friday afternoon. Roauf Ahmadi, a spokesman for the western regional police commander, said the airstrike also wounded 15 Afghan soldiers and one policeman.

"During an air attack by NATO forces in Badghis province, seven Afghan forces were killed," a statement from the Defense Ministry said.

The ministry said NATO and Afghan authorities were investigating the incident and would issue a report soon.

He said 7 Americans were "hit," but did not have a more specifics.

No other confirmation of this report was available at that time.

NATO headquarters issued a statement saying coalition forces killed a militant and arrested "a few" suspected militants, including someone who was helping insurgents transport weapons and bomb-making materials to the area.

Red Crescent spokesman Walid Akbar confirmed that international forces had raided the office, but said he had not received any reports of deaths.

Akbar said his organization was negotiating with provincial authorities for the release of the three arrested men, whom he identified as a driver, a communications officer and a guest.

"We are a neutral organization. We help both parties. We help the victims of the war," he said. 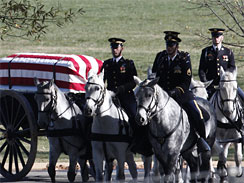 (AP Photo/Charles Dharapak)
According to the NATO statement, alliance forces and Afghan police had targeted a compound "which credible intelligence reported as a location known historically to be used by Taliban commanders."

It said the joint forces came under fire from inside the compound when the police chief in the operation called for those inside to come out. One man was killed when the forces returned fire, it said.

One of those arrested identified himself as a Taliban "facilitator," the statement said, adding that he was responsible for financial support and transporting bomb material and weapons into the area.