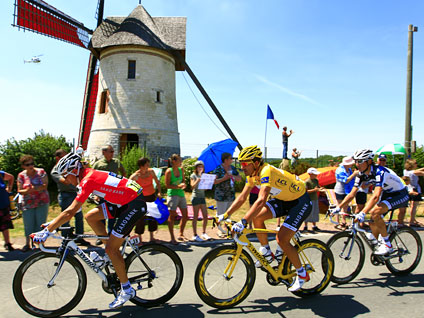 The two spherical structures mounted on the rooftop of a building high on a hill at the city's northeastern edge look more like pieces of modern art.

The miniature wind turbines are in fact part of a yearlong experiment that aims to generate enough wind power to reduce the building's electricity bill while culling lessons about clean energy production.

Paris, like other European cities seeking to raise the public's awareness about green energy, initiated the project at the Maison de l'Air, or House of Air, a small and child-friendly space dedicated to educating the public about the importance of fresh air in daily lives and the dangers of pollution.

The experiment will measure indicators like the turbines' noise level, their integration into the landscape and their output in order to determine their viability for future use on a wider scale, according to Michel Giry, who runs the museum space overlooking a modern park in the multi-ethnic, working class Belleville neighborhood.

Aptly, the Maison de l'Air was chosen as the site for the city's first mini windmills not only because of its relation to the subject but also because of its elevated height -- one of the highest in Paris, and thus a location susceptible to wind.

The pilot project, launched with local government fanfare, was a core piece of the city's environmental sustainability week in April, and consists of colloquia about the environment, urban walks and activities like a Saturday workshop to teach children how to create their own paper windmills. It also factors into Paris' Climate Plan, which seeks to go 10 percentage points beyond the European objective of reducing greenhouse gas emissions by 20 percent before the year 2020.

Each of the windmills, which can cost up to 25,000 euros (about $32,000), is expected to produce at least 15,000 kWh of electricity, according to Elena Energie, a year-old start-up in the southeastern city of Grenoble that manufactures the devices. Through an agreement with Paris, the company provided and installed the equipment at no charge.

"Currently an estimated 10 to 15 percent of the building's consumption is covered by the production of the wind turbines," according to Giry. "This percentage could be improved if the building was better insulated."

He estimated that if the production rate of 50 kWh per day -- as seen since the April 1 installation -- is maintained, in one year the turbines could produce up to 20,000 kWh or the equivalent of enough energy for six households consisting of two adults and two children (but no electric heating).

A counter prominently displayed inside the museum building tells visitors how many kilowatts per hour have been produced. Soon, another device will measure the amount of CO2 not released into the atmosphere.

And depending on the results, the city could install additional urban turbines at other elevated locations around Paris, such as in Montmartre, the neighborhood of the famed Sacre Coeur church and at the Parc des Buttes Chaumont, a hilly and sprawling expanse in north Paris with a lake, several cliffs, a grotto and restaurants. Walkways between buildings in the city's outskirts are also being studied as potential sites.

"The experience can and should be an incentive for Parisians who doubt the feasibility and effectiveness of this kind of energy production," Giry said.

Still, upon hearing about the impending wind turbines, some of the museum's neighbors imagined 100-foot tall contraptions with blades whirling at deafening decibels and an offensive aesthetic that would visually pollute the skyline.

"At first, I thought it was going to be ugly," said Terence Marshall, a retired American professor who has lived in Paris for over 30 years. "I did fear it would be one of these huge Aeolians."

On his way home one afternoon, he decided to stop for a closer look -- and listen -- at the site since, as a neighbor, he had witnessed the project's evolution from idea to installation. They're not a terrible eyesore and produce little noise, he decided, but he was not convinced that the benefits would ultimately justify the costs.

"It's a nice story," said Marshall, 67, emphasizing that a tale about the environment may be heartwarming at best but it is not much more.

Energy from the windmills might cover only 2 percent of the city's electricity needs, he said. Furthermore, about 80 percent of France's energy is nuclear, unlike in the United States, which worries about nuclear waste disposal, he said, and the bulk of Paris' pollution comes from cars.

Marshall, who as a lecturer on political philosophy and American politics often debated these issues with his students and colleagues, noted another influencing element at work: politics.

"Ecology is a political party here," Marshall said. "Governments can stand or fall by virtue of their support."

As a case and point, the Socialists and the green party joined forces last month to hand the ruling Union for a Popular Movement party (UMP) a handsome defeat in the regional elections.

And governments, Marshall said, are looking for that support.