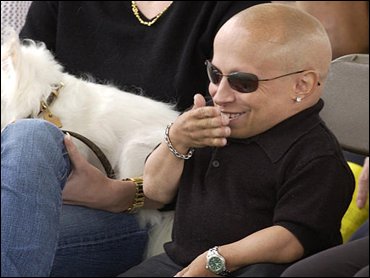 The hometown of 2-foot-8 actor Verne Troyer, who played Mini Me in the Austin Powers movies, threw a party and parade for him.

Then someone stole one of two 4-foot-square road markers honoring the town's diminutive favorite son.

"So far, we haven't heard anything yet," said Undersheriff Dennis Allen, who helped organize the event. "We're going to give it a few days, check eBay to see if it turns up. We would like to see the sign returned."

If it doesn't turn up, the village will have to decide whether to replace it, he said.

On Friday, the 34-year-old Troyer stood on a railroad tie flower box as he unveiled the sign on the east side of the village as part of Verne Troyer Days.

Troyer, who starred in "Austin Powers in Goldmember" and "Austin Powers: The Spy Who Shagged Me," thanked the committee that invited him back to his hometown and threw him a three-day party.

"I'm very honored to be here," he told the Sturgis Journal on Friday. "I was a little skeptical at first. I never imagined in my wildest dreams that there would be so many people interested."

"It was a very, very successful event for the entire community," Allen said. About 50 people attended the sign unveiling Friday afternoon.

Then, sometime between 7 p.m. Saturday and 12:30 a.m. Sunday, one or more people made off with the sign, Allen said.

The missing sign is blue and has a foot-square picture of Troyer in the bottom right corner. It bears the words, "Welcome to Centreville Hometown of actor Verne Troyer."

The other sign on the west village limit remains.