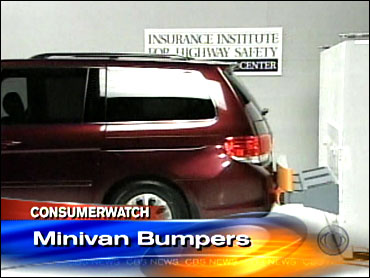 A minor fender-bender in a minivan can rack up thousands of dollars in repair costs, according to new crash tests conducted by the insurance industry.

Repairing damages to minivans involved in low-speed crashes of three-to-six miles per hour could range from $483 to more than $3,500, according to test results released Thursday by the Insurance Institute for Highway Safety.

"These vehicles are basic family transportation, but they don't do a good job protecting against damage in minor crashes," the institute's Adrian Lund told Early Show consumer correspondent Susan Koeppen.

"Most people think," Lund continued, "they've got bumpers on their vehicle and, if there's a minor tap ... you should be able to drive away from that. What we see in these tests though is that, if you're driving one of these minivans, you're not going to be able to drive away from most of the collisions that you'll have in traffic, because the bumpers just don't bump.

The institute conducted a series of four low-speed crashes on six 2008 minivans.

The Nissan Quest had the most expensive bill for the minivans, costing $3,549 for a low-speed crash to the rear bumper. In the four tests, the Quest tallied $8,102 in combined damages.

The Honda Odyssey had the lowest combined repair costs of $5,258 in the four tests. The Toyota Sienna cost $5,726 in repairs for all the tests, while the Chevrolet Uplander had $5,799 in expenses. The tests estimated $6,525 in damages to the Kia Sedona.

Tailgates on five of the six minivans - except the Uplander - had damage in the rear full-width test. Only the Quest and the Sienna required the tailgate to be replaced.

"By comparison," Lund told Koeppen, "we tested a 1981 Ford Escort, which was built when federal standards were stronger. That Escort went through the same four tests with only about $500 in damage."

Lund is calling for stricter standards and better engineering.

Still, notes Koeppen, the minivans did better than a lot of cars that were tested earlier this year, because the bumpers on minivans are a little bit higher than the average car.

Institute senior vice president Joe Nolan said the Quest "miserably failed" the test to the full width of the rear bumper and sustained twice as much damage as the Honda Odyssey in that specific type of crash.

In the Quest's rear test, a reinforcement bar cracked and was driven into the rear body of the vehicle, requiring costly repairs, Nolan said.

Jeannine Ginivan, a spokeswoman for Nissan Motor Co., said the automaker believes the Quest "performs competitively in terms of cost of repair."

Ginivan said it was "difficult for these four combined tests to accurately reflect the various conditions experienced by drivers everyday and it is highly unlikely that anyone would be simultaneously involved in the four low-speed crash modes" under normal driving conditions.

Kia spokesman Alex Fedorak said the Sedona's bumpers are designed to protect motorists in a severe collision. He noted that the minivan has received top scores in the government's crash tests and received a "Top Safety Pick" designation by the Insurance Institute.

Bumpers are designed to absorb the energy of a low-speed collision and prevent damage to the front-end and rear-end. Serious injuries are uncommon in low-speed crashes, and the institute's bumper tests did not assess passenger safety.

Insurance claims of under $4,500 for front and rear repairs from low-speed crashes account for about $6 billion in insurance payouts annually, or about one-third of all insurance payouts for vehicles, said Russ Rader, an institute spokesman.
A minor fender-bender in a minivan can rack up thousands of dollars in repair costs, according to new crash tests conducted by the insurance industry