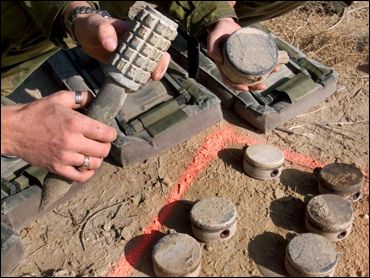 As they continue their advance in Iraq, U.S. and coalition forces must step carefully across a landscape riddled with millions of land mines.

U.N. officials estimate up to 10 million of them are buried in Iraq, mostly along the border with Iran and in the northern region occupied by the Kurds.

"They're all over the place," said Polly Brennan, a UNICEF employee who helped remove mines in northern Iraq during the mid-'90s. "They're on mountainsides, they're in villages."

Members of a reconnaissance unit of the British Royal Marines had a close call this week when they wandered into a minefield in fading light on the Al-Faw Peninsula in southern Iraq. The soldiers managed to find a safe path out.

Most of Iraq's mines date to the country's war with neighboring Iran during the 1980s. Both sides planted millions of mines on both sides of their rugged border.

Iraq has also planted mines in the northern part of its own territory as part of a campaign against the Kurdish population, and along the Kuwait border during the 1991 Gulf War.

Nobody really knows how many mines are contained inside Iraq's borders, because the country has refused to share information with the United Nations and other international agencies. But it is considered one of the world's most heavily mined countries.

Except for the northern no-fly zone, where international agencies have conducted some mine-clearing and minefield mapping, there is no way of telling where mines are buried.

"We really have no idea," said Elizabeth Bernstein of the International Center to Ban Landmines. "In the rest of the country it's very difficult to get any information."

U.S. personnel could even tread on mines their own comrades planted 12 years ago to hinder the movement of Iraqi forces.

"Every step these soldiers take could be deadly," said Rachel Stohl, a senior analyst at the Center for Defense Information, a Washington think tank. "You're definitely going to see land mine casualties."

During the 1991 war, land mines caused 6 percent of U.S. casualties, injuring or killing 81 people, according to a General Accounting Office report issued in September. In Kurdish-controlled northern Iraq, the International Campaign to Ban Landmines reports, an average of one person a day is killed or injured by a mine.

Most of the mines in Iraq are of a simple but gruesome Italian variety known as bounding fragmentation devices, Brennan said. When they are triggered, a small explosion bounces them a few feet into the air, where a second, larger explosion shoots shrapnel in all directions.

Neither Iraq nor the United States has signed a 145-nation treaty banning anti-personnel mines.

U.S. military leaders have not ruled out using mines during this operation, but said they would be employed only to prevent Iraqi troops from getting access to biological or chemical weapons facilities.

The United States now uses mines that explode after a certain amount of time, decreasing the chances a noncombatant will set them off. But the GAO report questioned the dependability of the time-delay, and anti-mine activists oppose their use.