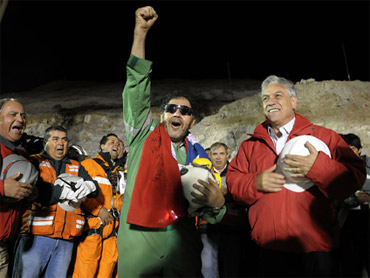 The Chile miners' ordeal trapped underground may be over, but emotional challenges and obstacles adjusting to everyday life await them above ground.

"It's likely that a percentage of these miners will experience some long-term stress reactions. And that can take anywhere from six to nine months to emerge after the trauma, so we need to watch them for a while," Colonel Tom Kolditz, chairman of the Department of Behavioral Sciences and Leadership at the U.S. Military Academy said on "The Early Show".

The 33 miners will likely have difficulty sleeping regularly.

"They are going to have nightmares, sort of lying jet-lag, only worse," said Kolditz. "And so, that's going to create friction in their families."

But the hardest part for the 33 miners who were trapped at the San Jose Mine may be their instant celebrity status.

"It will definitely tend to pull this group apart, pull individuals in different directions are," said Kolditz. "It's very hard work and they're tired right now. So, they're going to have to balance their rest and recovery with all this notoriety and fame."

Chile has promised to care for the miners for six months at least - until they can be sure each man has readjusted.

Once rescued, the miners were taken to a hospital in Copiapo for observation. Initially, officials said all would be there a full 48 hours after emerging from the mine.

But Health Minister Jaime Manalich said some would probably be able to leave Thursday. First lady Cecilia Morel confirmed that to The Associated Press.

"They are being kept more as a preventative measure than to treat anything," she said. Better to be in the hospital "than at home where they could be given meat and fried pork rinds," she said.

All but a few of the men emerged in very good health, officials said.

Manalich said many had been unable to sleep, wanted to talk with families and were anxious. One was treated for pneumonia, and two needed dental work.

Dr. Guillermo Swett said miner Jimmy Sanchez, at 19, the youngest of the group and the father of a 4-month-old baby, appeared to be having a hard time adjusting and seemed depressed.

Kolditz said that the miners' structure underground was beneficial.

"That structure, while they were down in the mine, really protected them from a lot of stress and trauma that they otherwise would have felt," said Kolditz. "Their challenge down there was a lack of certainty, of volatility, ambiguity and a leader can take structure and can take purpose and put it into a group and literally create feelings of certainty and hope in that group by doing that."

No one is known to have survived as long trapped underground. For the first 17 days, no one even knew whether the men were alive. In the weeks that followed, the world was captivated by their endurance and unity.

With hardhats held to their hearts, the pair led the rescue team in singing the national anthem. Broadcast by state TV, it seemed ubiquitous in small country of 16 million roiling with pride.

"Chile today is more united and stronger than ever and I think that Chile is today a country more respected and more esteemed by the world," Pinera said after chatting with Urzua on live TV about how the men endured.

The rescue exceeded expectations every step of the way. Initially, officials said it might December before the men could get out. Once the drill that opened the escape shaft pierced the men's subterranean prison, they estimated it would take 36 to 48 hours to get everyone out.

Previously unimaginable riches awaited men who had risked their lives going into the unstable mine for about $1,600 a month.

At some point, the men will need to decide whether they will return to the mines.

Many of their relatives are dead-set against it, but they also acknowledged that they probably couldn't stop the miners from going down again.

Mario Medina Mejia, a local geologist. said plenty of Chilean miners have returned underground after close calls, and he compared it to sailors who survive shipwrecks only to ply the waves again.

"If they need the work they will return to the mine," he said. "It's their life, their culture, the way they make their living."