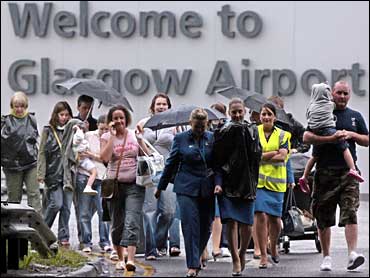 There's been no official confirmation, but there's a report that one of the dolphins on duty with the U.S. Navy in Iraq is missing.

According to the London Times, Tacoma, a 22-year-old dolphin trained to search for mines underwater, has not been seen since leaving on his first mission.

Tacoma and his fellow dolphin, Makai - both part of the U.S. military's Mammal Maritime unit - were flown into the Iraqi port of Umm Qasr by U.S. Navy helicopters on Tuesday and began their mine-detecting work the next day.

Tacoma's handler, Petty Officer Taylor Whitaker, told the Times after 24 hours that he wasn't worried and suggested that Tacoma might have met up with "some local" marine life.

Calling the dolphin's name and offering the lure of his favorite fish reportedly has yet to cause Tacoma to swim back to base.

The Atlantic bottle-nosed dolphin's first mission was checking for underwater mines to clear the way for the arrival of the British ship Sir Galahad, which carried the first large shipment of humanitarian supplies to reach Iraq.

The supply ship pulled into port at Umm Qasr Friday, just behind the British mine-detecting ship HMS Sandown, and accompanied by U.S. Navy and Kuwaiti patrol boats - a security escort through the Khor Abdallah waterway.

U.S. and British minesweeping teams - including 50 divers - had found and detonated six potential mines in that waterway in the 36 hours before the ship docked with its precious cargo: 100 tons of water and 150 tons of rice, lentils, cooking oil, tomato paste, chick peas, sugar, powdered milk, tea, blankets, medicine and other emergency supplies.

Until the dolphins arrived, the divers were stuck with searching for the mines by hand, in water so muddy some compared the job to crawling around in mud with your eyes shut.

"It's very likely (Saddam) would mine these waters to prevent coalition forces from entering," said U.S. Navy Commander Ian Hall, who coordinates four American "mine hunter" ships that have been methodically sweeping the channel with six British counterparts.

Hall said his teams could not positively confirm whether the objects recently detonated were newly laid mines or leftover ordnance from earlier Iraqi wars but said that the location of several were highly "suspicious."

Working intensively for the past week, the teams cleared a 200 yard-wide channel along the 40 mile-route from the Persian Gulf into the port of Umm Qasr, which allied forces are hoping to make the center for humanitarian relief distribution.

Beside mines, authorities were also on the alert for fast-moving "suicide boats" such as the one which attacked the USS Cole as it refueled in Yemen in October 2000.

After it docked Friday in Umm Qasr, the Sir Galahad was quickly unloaded by forklifts and cranes. The bulk of the aid was donated by Britain, and military officials will soon fan into Iraqi villages to assess relief needs.

The Navy's dolphins, who are trained to avoid danger by never touching any of the suspected mines they find, are valued by the military because their natural sonar allows them to detect mines even under the most difficult conditions.

Prior to arriving in Iraq, experts had mentioned one worry about the marine mammal deployment there: the potential for a turf clash between the local Iraqi dolphins and the military dolphins, who were trained in California.

Dolphins are territorial animals and there was some concern that the Iraqi dolphins might chase out their newly arrived American cousins, causing them to swim into other waters and out of military usefulness.

The Navy has been using marine mammals since the early 1960s, when military researchers noticed how sea mammals' highly developed senses, such as the dolphins' sonar, could be harnessed to locate mines and do other underwater tasks.

Dolphins were used in the 1970s during the Vietnam War. In the late 1980s, six Navy dolphins patrolled the Bahrain harbor to protect U.S. ships from enemy swimmers and mines. They also were used to escort Kuwaiti oil tankers through potentially dangerous waters.

Umm Qasr has already been proven to be a likely hazard.

Dozens of mines were recently found by U.S. Marines near a warehouse in Umm Qasr. Iraqi pilot boats and fishing dhows partially loaded with mines have been found at docks in the port town, and coalition forces recently intercepted a barge loaded with anti-ship mines.

"It's a threat that we have to take seriously," said the Sir Galahad's Capt. Roger Robinson-Brown, whose crew is on alert for possible suicide attacks. "Once they're headed toward you, there's nothing you can do."