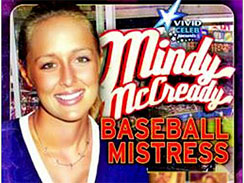 McCready is releasing her first country album in 14 years, "I'm Still Here," and plans a tour this spring to promote it.

The album, which opens with a somber string arrangement and prayerful words about sin, forgiveness and making amends, includes the songs, "I Want To Love You" and "I Want a Man."

"We are not aware of the production or release of the alleged film that seems to have surfaced via various media reports," McCready's attorney Adam Dread said Tuesday in a statement. "However, we can confirm that any illegally- obtained property, and/or fabricated footage, and the release thereof, will be dealt with swiftly following proper legal procedure."

The Huffington Post reports that a teaser clip has leaked online, which has "some NSFW sex, screaming and traces of nudity."

According to Fox News, McCready goes into great detail in the tape about her alleged affair with married Red Sox pitcher Roger Clemens.

On one of the interview portions, McCready says that she and Clemens didn't get intimate until she was of legal age, and describes the MLB star as being "good" in bed, despite having "a lot of problems" with erectile dysfunction, Fox News reports.

During the hour-long video, which allegedly features McCready and a boyfriend named "Peter," she dishes on her celebrity conquests and refers to her ex-fiancé Dean "Superman" Cain as being better equipped behind closed doors then Clemens.

No lawsuit has yet been filed over the footage.

In addition to her music career, McCready is known for a tabloid life of domestic abuse, drug and DUI arrests, and suicide attempts.

She later had a high-profile role in the 2010 edition of VH1's "Celebrity Rehab." On the TV show, she performed her title song, "I'm Still Here" about surviving difficult times, which brought her "Rehab" colleagues to tears.