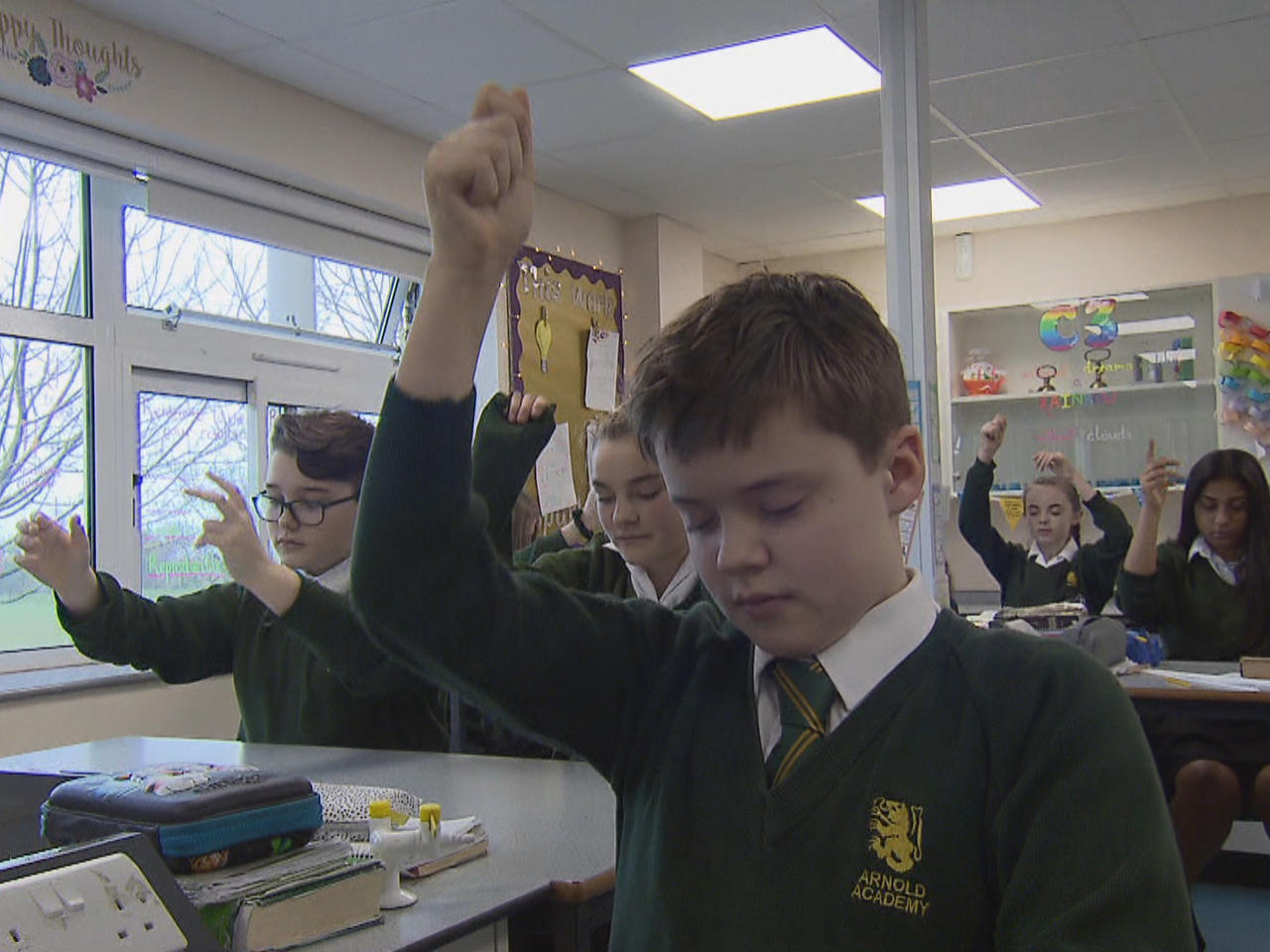 In our "School Matters" series, stress-reducing exercises in mindfulness are gaining popularity across the world, with apps like Headspace and Calm gaining more than 100 million users. Now, schools are exploring how these techniques can help students battle mental health issues.

At Arnold Academy, north of London, students are learning to open up about their anxieties.

"My great auntie died over the weekend," said one girl.

"I'm feeling a bit worried because my grandmother has high blood pressure," said another student.

One girl said, "Worried, because I get camera fright sometimes, and there's a camera pointing in my face right now!"

Their list of concerns runs long, from homework to the pressures of dealing with technology and social media.

To tackle these tensions, their school, and nearly 400 others across England, are trying something new: short, daily doses of relaxation and mindfulness.

Over three years, researchers plan to study whether these exercises can improve the mental health of children in England, where anxiety among kids is rising.

The trend is similar in the U.S. A recent survey found a 20 percent jump in American children diagnosed with anxiety over five years.

"If we find out that this is beneficial, then that's great," said professor Jessica Deighton. She said the government-backed trial in England, which she's leading, is the largest of its kind.

Correspondent Roxana Saberi asked, "Why do you think these practices could be beneficial for kids?"

"In early piloting, what they were saying is, their life is busy, very busy, maybe busier than it was when we were children, and they find it's an opportunity to sit and reset."

That's why, history teacher Rachel Bradford says, after just two-and-a-half months of these exercises, Arnold Academy saw an 80% drop in reports of misconduct.

"It would be impossible for there to be such a big reduction in behavior issues if it weren't partly attributed to the relaxation techniques," she said.

Twelve-year-old Harrison says he doesn't get in trouble like he used to. He says the relaxation practice has helped. "It just released my stress and stuff, and it's just helped me out a lot."

When Saberi asked a group of students who had been helped by learning relaxation techniques, all but one, Olivia, raise their hands.

"Well, my usual way of calming down is to move," said Olivia. "So, that's why I do dance. When you do relaxation breathing, it's like the complete opposite. So, I don't really feel it."

Deighton said, "I think there's a danger people get carried away with one approach. That's why it's important to do this research because actually these practices might turn out not to be effective."

Saberi asked Bradford, "What would you say to skeptics who say, these techniques might help deal with the symptoms of anxiety, or mental health issues, but they're not dealing with the causes?"

"That would be right," she replied, "but if we could deal with what you actually see, then we can then start to deal with the cause."

If researchers conclude that these practices are effective, supporters hope all schools in England will eventually offer them.

"Schools are not just there to get children the best grades that they can," said Bradford. "We are also here to help our children become the very best versions of themselves."

Saberi asked the students, "How many of you think that adults should also learn relaxation techniques?" Everyone raised their hands.