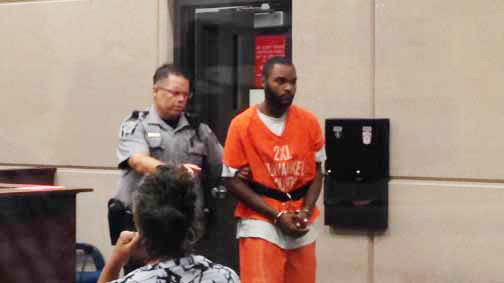 MILWAUKEE -- A Milwaukee man is charged with drowning his 3-month-old son in a pond as a group tried desperately to intervene.

Twenty-five-year-old Sean Flowers was charged Tuesday with first-degree intentional homicide in the death of his son, Sean Flowers III.

According to a criminal complaint, Flowers was attending a family party Saturday when he became upset with the child's mother, took the baby and left the apartment.

Witness Robert Amstadt described the disturbing scene to the Milwaukee Journal Sentinel, calling it "the most evil thing I've ever seen." From an apartment window, he said he saw the young father walk into the storm water pond holding the infant and then sit with the water up to his chest, the baby beneath its surface.

"That baby cried all the way out into the water," Amstadt told the paper. "Then the crying stopped."

He said another man waded into the water in an attempt to save the child.

"He was pleading, 'Let the baby go, give me the baby,'" Amstadt said.

Just before the incident, he said he heard a loud argument outside an adjacent apartment building, and then a woman screaming, "Give me back my baby." He then saw a large group attempting to stop the man from wading into the water with the child, to no avail.

When police arrived, the group was yelling "he's drowning the baby."

An officer found the baby in the water, but attempts to revive him failed. Police brought Flowers back to shore and had to use a stun gun to handcuff him.

A witness who said he tried to rescue the baby told police Flowers was saying, "Abraham killed his son Isaac, Jesus will forgive me," reports CBS affiliate WDJT.

When police informed Flowers of the murder charge, according to the station, he didn't show emotion and asked, "How much time does that carry?"

The Journal-Sentinel reports Flowers and the infant's mother, 26, also have another child who is a toddler.

The woman had reportedly filed for a restraining order against Flowers last year, alleging he had attacked her, according to the Milwaukee Journal Sentinel. Citing court documents, the paper reports his child support payments were set to increase this week.

In court Tuesday, Flowers' bail was set at $1 million, reports WDJT. He was ordered to have no contact with the mother of the child and her family.

Defense attorneys said he had shown remorse for his actions, but a prosecutor said he told his mother of his intentions before he walked out to the pond with the infant.