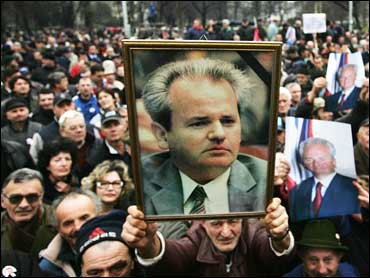 Slobodan Milosevic's remains went to his hometown for burial Saturday after a farewell ceremony in Belgrade attended by more than 50,000 admirers in a strong show of Serb nationalism in the Balkan republic.

A hearse carried the coffin of the former Serbian leader, who died a week ago while on U.N. trial for some of Europe's worst atrocities since World War II, to the industrial town of Pozarevac, 30 miles south of the capital, for another public farewell before interment in the backyard of the family estate.

Knots of admirers gathered along the highway leading to Pozarevac, waving to the convoy and tossing flowers onto the road. Black-clad security forces lined the roads.

Authorities refused to approve an official ceremony for Milosevic, who presided over four Balkan wars in the 1990s and the breakup of Yugoslavia that cost some 250,000 lives. But Saturday's farewell, organized by Milosevic's Socialist Party, had many of the trappings of a state funeral, from the venue to the speeches by top Socialist leaders.

An estimated 50,000 supporters, many of them bused to Belgrade from Bosnia, Croatia and Kosovo by Milosevic's Socialist Party, packed a square in front of the federal parliament building.

Many wept uncontrollably and chanted "Slobo! Slobo!" at the sight of the flag-draped coffin on a bier atop a red-carpeted stage. Some clutched photographs of Milosevic or the U.N. war crimes tribunal's two most-wanted fugitives: Bosnian Serb leader Radovan Karadzic and his wartime military chief, Gen. Ratko Mladic.

"Slobo is a hero and heroes never die," read a banner held aloft by the crowd. "Tribunal kills," said another.

Top ultranationalist leaders and at least five retired ex-Yugoslav Army generals wearing parade uniforms stood by the stage. Serbian television, which broadcast the ceremony live, reported that an elderly mourner died of a heart attack during the two-hour ceremony.

"We are bidding farewell to the best one among us, fully conscious of his greatness," Socialist deputy president Milorad Vucelic said.

"Our Serbia will rise like a phoenix from the ashes, it will forever be proud of you and your legacy," Vojislav Seselj, a Serbian ultranationalist leader in custody at The Hague, said in a letter read by Radical Party official Aleksandar Vucic.

"I promise to carry on the battle against The Hague criminals with the same fervor you had. May God grant you blessings of paradise. May the sacred Serb soil grant you eternal peace."

But some drivers passing by the square honked their horns and made obscene gestures at the Milosevic supporters, most of whom appeared to be middle-aged.

"History will prove that Slobodan Milosevic was right," Clark said, drawing cheers in a eulogy that savaged the West for its "determination to dismember Yugoslavia."

"It is critically important to remember his struggle to preserve Yugoslavia," Clark told The Associated Press. "He became president at a time of greatest crisis. Everyone knew his health was failing but he was not granted proper medical care. Amid the struggle, his heart gave up."

They also burned Milosevic's picture and scuffled briefly with a dozen Karadzic supporters trying to disrupt the gathering.

Milosevic died a week ago in his room in a detention center near the U.N. tribunal in The Hague, Netherlands, which was trying him on 66 counts of war crimes, including genocide. He was the first head of state to be extradited by his country for trial by the U.N. court.

Milosevic's Socialists and ultranationalists, ousted from power with Milosevic in 2000, hoped to make political gains from their leader's death. They invited hundreds of thousands of his supporters to the Belgrade farewell and the burial in Pozarevac.

In Pozarevac, Milosevic will be buried beneath a backyard linden tree where he first kissed his wife, Mirjana Markovic. The double grave has space for his widow. Markovic reportedly has said she wants to be buried with him when she dies.

Security was tight in Pozarevac, with police on heightened alert and extra ambulances parked around town. A curtain of red roses, the Socialists' symbol, hung over the entrance to the estate.

Socialist organizers said no member of the immediate family would attend.

Markovic, in self-imposed exile in Russia, faces Serbian charges of abuse of power during Milosevic's 13-year reign. His daughter, Marija, who is estranged from Markovic, told the Montenegrin newspaper Dan she would demand the exhumation of her father's body for "a proper burial" in Montenegro, where she now lives.

Organizers said 70,000 people viewed the coffin in its two days of public display at Belgrade's Museum of Revolution. But the turnout was much lower than organizers' predictions of hundreds of thousands and nowhere near the huge crowds Milosevic commanded in his heyday.

Milosevic's lawyers alleged he was poisoned, but the tribunal said Friday an autopsy and toxicology tests showed there were no medicines in the body in quantities high enough to kill him.

U.N. war crimes tribunal president Judge Fausto Pocar also said an outside investigation will be conducted on the running of the U.N. detention center where Milosevic was held during his four-year trial and where he died last Saturday.