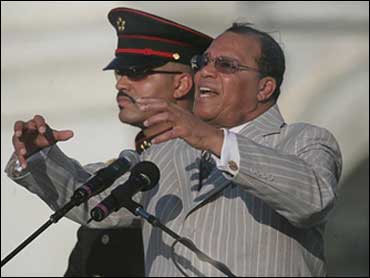 Railing against the delayed relief for victims of Hurricane Katrina, Nation of Islam leader Louis Farrakhan said Saturday that the federal government should be charged with "criminal neglect of the people of New Orleans."

"For five days, the government did not act. Lives were lost," Farrakhan said at the 10th anniversary of the Million Man March. "We charge America with criminal neglect."

A crowd of thousands cheered as dozens of prominent speakers — academics, activists, artists and media pundits — spoke, recited poetry and sang songs in the 12-hour program on the National Mall.

Pointing to the broad spectrum of participants, Farrakhan said the march included an "unprecedented" array of black leaders of organizations "coming together to speak to America and the world with one voice."

"This tells us that a new day is dawning in America," he said.

CBS News reporter Dan Raviv reports The Nation of Islam is joining other groups to form a coalition of the poor. The goal is to rebuild and improve communities and to demand reparations from the government for past injustices.

"We have been taught how to serve others, but we have never been trained how to serve one another," Farrakhan, who also put together the original march, said Friday. "I'm hoping that this Millions More Movement will make the learned of us a servant of the unlearned."

Ten years ago, Farrakhan urged black men to improve their families and communities — women, whites and other minorities had not been invited. On Saturday, all were welcome at the Millions More Movement, which organizers said would build on the principles of 1995 and push people to build a movement for change locally and nationally.

Neither Farrakhan, who spoke for 75 minutes, nor police would not offer a crowd estimate.

Associated Press photos showed the gathering was significantly smaller than that of 1995, when Boston University researchers estimated between 600,000 and 1 million participants. The Washington Metropolitan Area Transit Authority said subway ridership by 7 p.m. was just under 368,000, compared with a Saturday average of nearly 220,000.

On the day of the march 10 years ago — a weekday, when regular commuters drove up overall ridership — that number was just over 804,000, the third-highest ever recorded.

Still, participants said they were inspired by the gathering.

Farrakhan "is the only one who can pull this magnitude of people together," said Michael Warren, 41, a Washington resident who attended for about five hours with three youths that he mentors. "No other leader since Martin and Malcolm have done this."

Many said the day held echoes of earlier gatherings.

Kelly Callahan, 65, of Newark said he had attended the 1995 march and Martin Luther King Jr.'s 1963 March on Washington. The movement, he said, is "more universal now."

He added that Farrakhan "is asking us to organize beyond political boundaries, religious differences, cultural differences."

Some speakers paid tribute to victims of the hurricanes in prayers and pledges of support, and many participants said the storm helped inspire them to come.

Katrina "brought the issues to the surface to some who were asleep," said Jason 2X, a Nation of Islam member who attended the march with several family members from Chicago.

During his speech, Farrakhan announced a Millions More Movement disaster relief fund, urging participants to give one dollar each week for victims.

He did not repeat his speculations in recent weeks that someone bombed New Orleans' protective levees, deliberately flooding black neighborhoods after Katrina struck.

"We want to know what happened to the levees," Farrakhan said Saturday. "We don't want to guess about it and we don't want to be guilty of following rumors."

Earlier, Jesse Jackson, the president of the Rainbow/PUSH Coalition, urged people to channel their frustration about Katrina toward change in their communities. He also told the crowd that "a barge in the canal hit the levee and the waters came rushing in," but he did not elaborate on whether he believed this may have been deliberate.

Farrakhan appears to be broadening his message beyond those of concern specifically to black Americans and the poor. He denounced President Bush, the war in Iraq and Muslims who kill "innocent life for political purposes." He also called for unity with Africa, reparations for slavery, inclusion of undocumented immigrants and a government apology to American Indians.

Danny Bakewell, publisher of the Los Angeles Sentinel, a black newspaper, said the gathering was "a glaring symbol of the possibilities that are in front of black people. This is not the end, it's a beginning."