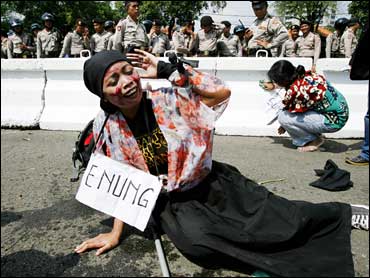 A millionaire couple accused of keeping two Indonesian women as slaves in their luxurious Long Island home and abusing them for years has been indicted on federal slavery charges.

Varsha Mahender Sabhnani, 35, and her husband, Mahender Murlidhar Sabhnani, 51, operate a worldwide perfume business with factories in Singapore and Bahrain.

The two were arrested last week after one of their servants was found wandering outside a doughnut shop on Long Island, wearing only pants and a towel. The woman was believed to have fled the home when she took the trash out the night before.

The couple pleaded not guilty in U.S. District Court. A magistrate judge set bail at $3.5 million and imposed home detention with electronic monitoring.

An indictment handed up Tuesday night formally charged with them with two counts of forced labor and added two counts of harboring illegal residents.

Charles A. Ross, who represents Varsha Sabhnani, has said the couple traveled extensively and that the two Indonesian women were free to leave whenever they wished. He previously described them as "model citizens" who "only want to clear their names."

Friends and relatives indicated the two would be willing to post bail, but as of Wednesday morning, they remained in custody.

The women, prosecutors said, were subjected to beatings, had scalding water thrown on them and were forced to repeatedly climb up stairs as punishment for perceived misdeeds. In one case, prosecutors said, one of the women was forced to eat 25 hot chili peppers at one time.

One of the women also told authorities they were forced to sleep on mats in the kitchen and were fed so little that they had to steal food.

The women legally arrived in the United States on B-1 visas in 2002; the Sabhnanis then confiscated their passports and refused to let them leave their home, authorities said. Identified in court papers as Samirah and Nona, the women said they were promised payments of $200 and $100 a month, but federal prosecutors said they were never given money directly. One of the victims' daughters living in Indonesia was sent $100 a month, prosecutors said.

They have since been cared for by Catholic Charities, according to a spokesman for Immigration and Customs Enforcement.