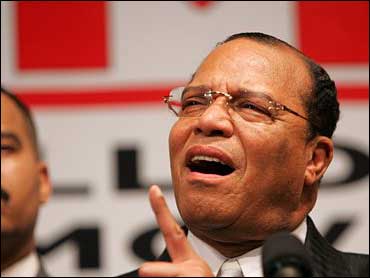 Black leaders called Monday for a rally in Washington this fall to mark the tenth anniversary of the Million Man March, this time including women.

Farrakhan, the leader of the Nation of Islam, appeared with former presidential candidates Jesse Jackson and Al Sharpton to announce the Millions More Movement in October.

It is billed as a more inclusive successor to the Million Man March, encouraging women and gays to attend.

Farrakhan, who has been accused of making anti-Semitic remarks in the past, issued a broad invitation that also took aim at the wealthy, his critics, and both political parties.

"Millions More means we're reaching for the millions who carry the rich on their backs," he said. He also used the sort of provocative language that has prompted past criticism.

"If anybody deserves to strap a bomb on themselves and give pain for the pain we have suffered, it is we. But none of us would kill," he said.

The Anti-Defamation League, which has long criticized Farrakhan, urged other black leaders to separate their cause from him.

"When will someone in the African-American community stand up and say that the Million Man March had a positive message but the pied piper is a racist and anti-Semite?" said ADL director Abraham Foxman.

Sharpton alluded briefly to the sometimes chilly relations among the three black leaders but said they were working together to make the event a success and to end disparities between black and white Americans.

"We don't come to argue today about who said what, who did what. Our family is in crisis," said Sharpton.

Organizers are promoting a Day of Absence from work and school on Friday, Oct. 14, followed by a march in Washington on the 15th, and religious services the next day.