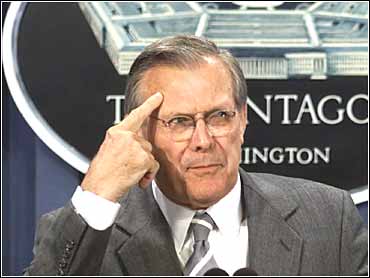 As the Pentagon pored over options for war against terrorism, President Bush on Friday gave the Pentagon authority to call 50,000 reservists to active duty for "homeland defense" and recovery missions.

Pentagon spokeswoman Victoria Clarke said the first reservists would be called up within days, but was not more specific. Other officials said the first calls could come this weekend.

Two government officials familiar with the president's plans stressed that the call-up was not part of a military mobilization aimed at the terrorists who struck Washington and New York on Tuesday. Instead, Defense Secretary Donald Rumsfeld wants the troops to support air patrols over New York and Washington and remain alert elsewhere in the country.

"This partial mobilization demonstrates the vital role of reserve forces in our national military strategy," the Pentagon announcement said.

Mr. Bush prepared for the call-up as the Pentagon weighed how to eradicate the terrorists who hit New York and Washington as well as the states and organizations that support them.

The military strike options go far beyond the short-term cruise missile assaults of years past in Afghanistan and Sudan and isolated airstrikes against sites in Iraq.

Instead, they involve the potential lengthy use of military forces on the land, at sea and in the air. Options include the covert insertion of elite special forces and long-range bomb strikes from manned aircraft, said senior military and administration officials, all speaking on condition of anonymity.

In the most explicit description yet of the Bush administration's intentions, Deputy Defense Secretary Paul Wolfowitz said Thursday the retaliation would be continued until the roots of terrorism are destroyed.

"These people try to hide. They won't be able to hide forever," Wolfowitz said. "They think their harbors are safe, but they won't be safe forever. One has to say it's not just simply a matter of capturing people and holding them accountable, but removing the sanctuaries, removing the support systems, ending states who sponsor terrorism."

Said Navy Secretary Gordon England: "This is not going to be a short program."

The huge number of dead and the vast destruction wrought by Tuesday's strikes has caused a different mindset to take hold among senior Defense Department officials, a ranking military official said.

"If you are really going to do war, you do it with all assets — political, economic and military, and that's what they want to do," the officer said.

The Defense Department is making some moves to return the nation to normal. The military's fleet of sophisticated radar planes — called AWACS — have been ordered to stop flying missions over the nation's airspace, Rumsfeld said Thursday night on CNN's "Larry King Live."

The decision coincided with the resumption of commercial airline flights.

But Secretary Rumsfeld also noted that combat planes continue to fly over the New York-Washington corridor. He said he has not decided when those flights should stop. "And we do have interceptors on 15-minute alert across the country on some 26 bases," Rumsfeld told CNN.

In comments at the White House earlier Thursday, Bush repeated his assertion that the attacks with hijacked jetliners on the World Trade Center and the Pentagon were acts of war.

"Now that war has been declared, we will lead the world to victory," Mr. Bush said.

Appearing with England in a Pentagon briefing room still reeking of smoke, Chief of Naval Operations Adm. Vern Clark pointed out that the Navy already has two aircraft carrier battle groups, each with 75 warplanes, near the Arabian Sea.

That is twice the usual number for that part of the world. The USS Enterprise had been due to return home after being relieved this month by the USS Carl Vinson, but it was ordered to remain in the area indefinitely.

Such battle groups normally include cruisers and submarines, which can be launch pads for long-range cruise missile strikes, perhaps a prelude to attacks by manned aircraft such as B-2 stealth bombers or B-1 Lancers.

There were no other indications Thursday of a buildup of American forces in the Middle East or elsewhere.

Neither Wolfowitz nor other defense officials hinted at when the United States might begin military strikes. Bush said he would be patient. On Capitol Hill, some lawmakers urged the administration to gather more information about the perpetrators of Tuesday's attacks and their supporters.

"This has got to be a very sophisticated inquiry," said Sen. Dick Lugar, R-Ind., a senior member of the Senate Foreign Relations Committee.

Mr. Bush is seeking $20 billion in emergency money to strengthen U.S. military readiness for the fight against terrorism and other uses related to Tuesday's attacks. The House is debating amendments that would add allocations, perhaps by as much as another $20 billion.